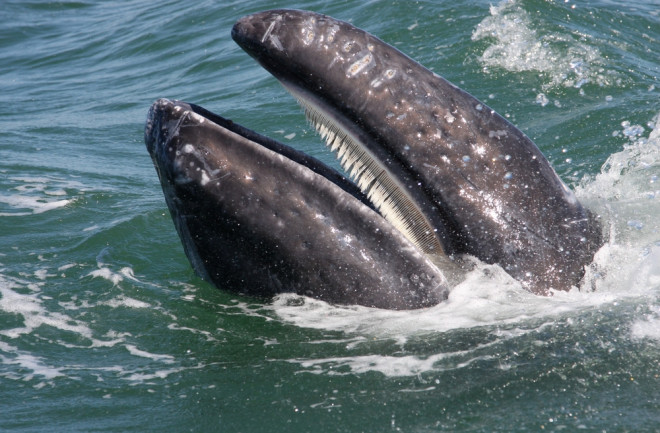 A gray whale shows off their baleen, the comb-like structure attached to their gums that allows them to filter feed. Previous theories explaining how baleen evolved might be wrong after researchers gave an ancient whales' mouth a closer look. (Credit: Jo Crebbin/Shutterstock)

One of the great mysteries in marine research is how whales developed baleen, the unique array of plates and bristles that allow them to filter thousands of pounds of krill and plankton every day.

Because baleen whales’ ancestors had teeth, it was thought that some ancient whales began to filter feed using their teeth like a sieve. Over time, the filtering behavior would have caused whales to evolve baleen to fill in the gaps of their teeth before replacing them entirely. Another theory was that a transitional group of prehistoric whales fed with both baleen and teeth for a period of time before losing their teeth. But both of these long-held ideas might have been proven wrong by a new discovery that suggests a different evolutionary progression from teeth to baleen.

Paleontologist Carlos Mauricio Peredo and a team of researchers say the fossil of a 33-million-year-old whale from the Oregon coast lacks both teeth and baleen. This suggests that some ancient whales first lost their teeth and then developed baleen later on, they say in a paper published in Current Biology this week.

“The specifics of how whales developed baleen has been an enigma going back to Darwin,” Peredo said. “Because the animal itself doesn’t have any teeth or baleen, that tells us that tooth loss was its own evolutionary process that happened before baleen ever originated. It’s almost like a two-step process: First you lose your teeth and subsequently you develop baleen later on.”

The species, named “Maiabalaena” or mother whale, was originally found in the mid-1970s by Douglas Emlong, an amateur fossil collector who worked along the Pacific coast and donated his collection to the Smithsonian Museum. The fossil consists of a nearly complete skull with ear bones, both mandibles, and associated postcrania. Although it hasn’t been studied much until now, Peredo and his team knew this whale’s mouth might have a story to tell.

Carlos Mauricio Peredo, a paleontologist at George Mason University and the National Museum of Natural History, stands with Maiabalaena, a 33-million-year-old fossil of a whale that lacked both teeth and baleen. (Credit: Smithsonian Museum)

Carlos Mauricio Peredo, a paleontologist at George Mason University and the National Museum of Natural History, stands with Maiabalaena, a 33-million-year-old fossil of a whale that lacked both teeth and baleen. (Credit: Smithsonian Museum)

“This fossil is really important … based on its anatomy and position in the whale family tree,” Peredo said.

The whale lived during the Eocene-Oligocene, a period of great ecological change that influenced prehistoric whale feeding behavior. In life, the whale would been around 15 feet long — which is pretty small by modern whale standards.

Baleen rarely fossilizes because it is made of keratin — the same protein in hair, nails and hooves. As a result, researchers must look for signs of foramina, little holes located in the jaw which would have contained blood vessels and nerves connected to the gums of filter-feeding baleen whales.

The Maiabalaena lacked foramina, the researchers observed. The jaw also lacked sockets, which are needed to hold teeth. That led the research team to wonder how the whale would have eaten without either teeth or baleen. Along came a revelation: suction feeding.

Many modern whales — such as the beluga, narwhal and beaked whale – have lost most of their functional teeth and primarily feed by sucking up single prey items such as fish and squid. Researchers haven’t really considered suction feeding as part of the whales’ evolutionary timeline. But a “sucking phase” is not as strange as it sounds, Peredo said.

“It’s perfectly feasible for whales to feed without teeth at all. Suction is a very viable mode of feeding that clearly works for whales. So many whales suction feed and do it quite well as their primary mode of feeding,” Peredo said.

Mammals can thank their hyoid bones for their suctioning abilities. These bones, observed in the fossil, sit in the throat and serve as attachment points for muscles that pull back on the tongue, creating negative pressure inside the oral cavity. This mechanism essentially creates a vacuum to facilitate swallowing.

“It’s a very basic and ancestral feeding mode for mammals,” Peredo said. “It is how we are nourished as infants. All mammals are born being able to do this, but whales just continue to do it as adults.”

While Maiabalaena appears to have existed during a transitional period between teeth and baleen, that span was short (relatively speaking), Peredo says, about 13 million years.

The appearance of those first bristle-mouthed whales was also what set the whales on the path to gigantism, as it let them eat more food at once. But why baleen replaced teeth in the first place is still a bit of an unknown.

It’s clear there’s much more to learn about the history of these elusive creatures. Sometimes, it’s a matter of looking at a fossil with fresh eyes and connecting the dots.

“Every fossil is like a lego piece or a puzzle piece. It’s like doing a 10,000-piece jigsaw puzzle and you’re missing one-tenth of the pieces,” Peredo said.