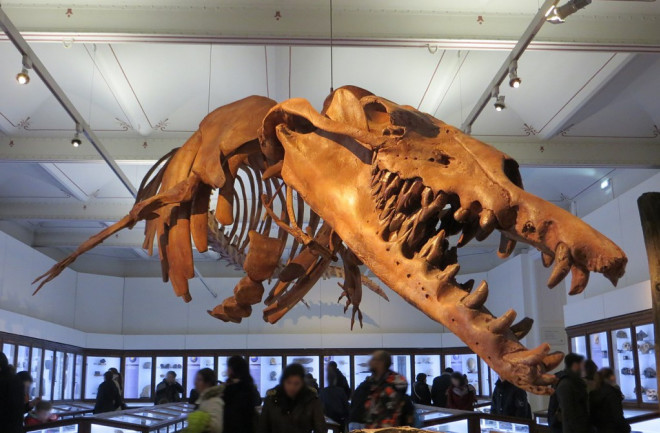 About 37 million years ago, the ancient whale Basilosaurus isis ruled the seas as an apex predator, according to new research. (Credit: Asmoth/Wikimedia Commons)

Analysis of its fossilized stomach contents suggests that Basilosaurus isis, an ancient whale that could grow to more than 50 feet long, swam at the top of the food chain and took its prey by the head. The new findings challenge previous suggestions that the formidable animal was a scavenger and suggest instead that it may have had orca-like behavior.

B. isis, one of two Basilosaurus species, has been found across North Africa, including in Egypt’s famously fossiliferous Valley of Whales (Wadi Al Hitan), where more than a hundred individuals have been excavated. The animal has provided researchers with a wealth of information, from estimations of its bite force (impressive) to analysis of its vestigial hind limbs (puny but significant…they’ve helped us understand how whales, originally land mammals, returned to the sea).

One thing paleontologists have puzzled over, however, is the animal’s feeding behavior. While its sheer size and toothy grin might suggest apex predator, some researchers believe it was more likely a scavenger in the shallow late Eocene seas it called home about 37 million years ago.

New analysis of Basilosaurus — including what the researchers are calling the first direct evidence of the animal’s diet — confirms a more predatory role for the enormous marine mammal.

Whale of a Tale

The new research focuses on a specimen of B. isis found in 2010 in Wadi Al Hitan, believed to be an old male based on several anatomical traits and significant tooth wear. The animal’s stomach contents included multiple specimens of Dorudon atrox, a smaller whale, and also at least one large fish, Pycnodus mokattamensis. The team also found a single shark tooth, but it is unclear whether the animal was eaten by Basilosaurus or lost its tooth while scavenging the large whale’s carcass.

But back to Dorudon: The remains were partial but represented at least two and as many as 13 of the smaller whales.

It’s not surprising to find Dorudon remains in the stomach of B. isis: Like Basilosaurus, Dorudon is commonly found in Wadi Al Hitan, with scores of complete and partial skeletons excavated. But while all of the Basilosaurus individuals found at the Egyptian site have been adults, about half of the Dorudon fossils have been juveniles, leading to the theory that the site was a calving area for the smaller whale species.

The partial Dorudon remains in this particular Basilosaurus skeleton all appear to be from juveniles, and several of the preserved cranial fragments show bite marks consistent with an injury inflicted by B. isis. Other juvenile Dorudon skeletons found at Wadi Al Hitan bear similar wounds, but adult Dorudon do not.

Bite marks to the head are typical of predatory behavior because the animal seeks to kill or immobilize its prey as quickly and efficiently as possible; scavengers, on the other hand, are more likely to target the upper torso and other meaty spots. Living marine apex predators, such as great white sharks, tend to hunt prey smaller than themselves but scavenge larger prey.

The new findings are consistent with Basilosaurus, the largest known marine animal of its day, being an apex predator. Evidence of whales preying on other whales is uncommon, both in the fossil record and among living species. But it does occur.

The best modern analog for B. isis, say the researchers, may be orcas, or killer whales, which skillfully hunt several other whale species, great white sharks and other marine life. Something to keep in mind: Basilosaurus isis was more than twice the size of today’s orca.

The open-access study appears today in PLOS ONE.