Ancient Stories Could Be More Fact Than Fiction

Stories come into being for a reason. 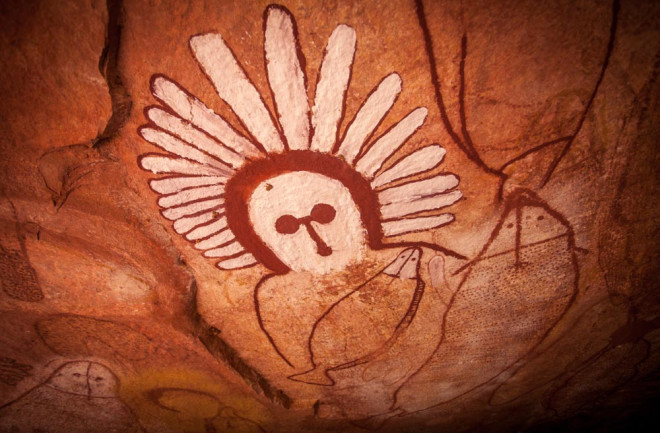 Nothing stirred in the relentless midday heat. The gum trees appeared exhausted, nearly drained of life. The hunters crouched in the foliage, their long, sharp spears poised to unleash at a moment’s notice. The giant birds that were the objects of their attention strode slowly, elegantly, unsuspecting. Most of these creatures were about 7 feet tall. The meat from even one animal offered the tribe sustenance for an extended period of time — but the hunters knew that this reward could come at a price. The mihirung paringmal were known to deliver a vicious, and sometimes deadly, kick.

The Tjapwurung, an Aboriginal people in what is now southern Australia, shared the story of this bird hunt from generation to generation across an unbelievably large slice of time — many more millennia than one might think possible. The birds (most likely the species with the scientific name Genyornis newtoni) memorialized in this tale are now long extinct. Yet the story of the Tjapwurung’s “tradition respecting the existence” of these birds conveys how people pursued the giant animals. At the time of this particular hunt, between 5,000 and 10,000 years ago, volcanoes in the area were erupting, wrote amateur ethnographer James Dawson in his 1881 book Australian Aborigines, and so scientists have been able to corroborate this oral history by dating volcanic rocks.

The extraordinary antiquity of such stories, which represent knowledge passed on largely orally, was not demonstrable until recently. This has allowed the full extent and implications of the longevity of the memories on which these stories are based to be appreciated. Another such oral history surrounds the Klamath people of Oregon, in the western U.S., who tell of a time when there was no Crater Lake, only a giant volcano towering over the landscape where the lake is today. As the story goes, the fractious volcano god, besotted with a local beauty, threatened the Klamath with fury and fire unless the woman acquiesced. But her people called upon their protector — a rival deity — who fought the volcano god, eventually causing his mountain home to collapse in on him and fill with water. For the next approximately 7,600 years, the Klamath taught each new generation the importance of avoiding Crater Lake lest they disturb the evil god within. With remarkable precision, geologists have determined that this is the time of the terminal eruption of the former volcano, Mount Mazama, and the creation of the landscape that exists today. The Klamath were there all along, and their memories of that ancient cataclysmic event have passed into global knowledge today.

Like Aboriginal Australians, the Klamath people became literate within the last 200 years or so. Before that, their societies were oral. Information and stories were passed on verbally from one generation to the next. In such societies, two factors generally create the conditions necessary for millennia-long preservation of accurate oral histories: specialized story-keepers and relative cultural isolation.

What are the limits of such ancient memories? For what length of time can knowledge be transferred within oral societies before its essence becomes irretrievably lost? Under optimal conditions, as suggested by science-determined ages for events recalled in ancient stories, orally shared knowledge can demonstrably endure more than 7,000 years, quite possibly 10,000, but probably not much longer.

The Klamath people in Oregon passed on a story about the formation of Crater Lake, shown here, for some 7,600 years. (Credit: Arcataroger/Wikimedia Commons)

Having spent most of my career as a geographer-anthropologist in the Pacific Islands, where I developed a huge respect for oral knowledge — both its capacity and its longevity — I have focused more recently on the much longer traditions of Indigenous Australians and similarly ancient stories from other long-existing cultures. My 2018 book, The Edge of Memory: Ancient Stories, Oral Tradition, and the Postglacial World, delves into the nature of such stories from many parts of the world and makes a strong case for acknowledging that the details they contain sometimes provide fuller records of the distant past than those readily obtainable by other methods.

Australia, the island continent, is roughly the same size as the conterminous United States. People first arrived around 65,000 years ago, according to recent research. They likely island-hopped across the Wallace line, the ocean gap that proved too wide for other animals to cross, which explains why Australia has such a singular biota. Yet except for a few peripheral contacts, Australian cultures seem to have evolved in isolation from the rest of the world for most of the last 65,000 years, at least until Europeans settled there in 1788.

Such cultural isolation proved a perfect situation for the construction and preservation of ancient stories. The indisputable harshness of the environment in most parts of Australia made it even better. After Antarctica, it is the world’s driest continent — most of it is desert.

For Aboriginal hunter-gatherers in Australia, the imperative of passing on precise information about the nature and possibilities of the continent’s harsh terrain was clear. Without such information, painstakingly accumulated by generations of ancestors, the children within a tribe might not survive. Careful story preservation seems to have been an effective strategy. In 1957, when anthropologist Donald Thomson contacted the Pintupi (Bindibu) Aboriginal people who lived in Australia’s forbidding Central Desert, he spent enough time with them to note that they “have adapted themselves to that bitter environment so that they laugh deeply and grow the fattest babies in the world.”

This map of Australia shows the 21 places where Aboriginal peoples have memories of times, at least 7,000 years ago, when sea level was lower than it is today. (Credit: Patrick Nunn)

In a nutshell, the unique conditions of Australia led to some of the world’s oldest stories. Some recall the time when the ocean surface was significantly lower than it is today, the shoreline was much farther out to sea, and lands now underwater were freely traversed by Australians. These stories are known from perhaps 21 places around the Australian coast, and most are interpreted as memories of the time when sea level was rising after the last great ice age — a process that ended around 7,000 years ago in Australia. Based on the evidence, these oral histories must have been passed down for more than seven millennia.

The island of Fitzroy, which is some 3 miles off the east coast of northern Queensland, offers an example. The Yidiɲɖi Aboriginal name for the island is “gabaɽ,” meaning the “lower arm” of a former mainland promontory. The term describes a situation that could have only been true when the sea level was at least 98 feet lower than it is today. After the last ice age ended about 18,000 years ago, land-ice began melting and sea levels began rising. Scientists know how this process unfolded along almost every coast in the world — when it began and ended, and how low the ocean surface was at particular times. Around Fitzroy Island, the ocean was most recently 98 feet lower about 9,960 years ago. If the original naming of Fitzroy Island as “gabaɽ” dates from a time when it was visibly attached to the mainland — and there is no good reason to suspect otherwise — then this memory is almost 10 millennia old. That means this story has been passed on orally through some 400 generations.

Descriptions of how the land connection to the island was “drowned” by a rising ocean are similar to stories from some coasts of northwest Europe and India. But these ancient stories are not as clearly preserved; many have slipped from the realm of oral record into the category of “legend.” I attribute this to the fact that the cultural histories of people living in these regions were less isolated.

A painting from 1884 depicts the legend of the destruction of Ys, a fabled city that was flooded when King Gradlon’s daughter, Dahut (the woman falling), unlocked the flood gates that kept out the ocean. (Credit: Évariste Vital Luminais/Wikimedia Commons)

One common legend from France’s Brittany coast tells how a city named Ys existed in Douarnenez Bay at a time when the ocean surface was lower than today. King Gradlon, who ruled from Ys, had protected it from the ocean by building elaborate sea barriers that allowed overwash to be drained from the city every low tide through a series of sluice gates. But at high tide one night, his daughter Dahut, possessed by demons, opened the gates, allowing the ocean to flood the city and forcing its abandonment. Today no one knows where the city of Ys once was. Using the same reasoning as for Fitzroy Island, it seems possible that if Ys ever existed — and why should we believe such a persistent story with an otherwise obscure subject was invented — its drowning occurred more than 8,000 years ago.

Today many of us rely so heavily on the written word — absorbing the messages it conveys countless times each day — that it is difficult to imagine what life would be like without it. When we need to learn something, we look it up and find an answer in the pages of a book or on a screen.

In preliterate societies, oral stories were likewise relied upon as necessary and meaningful — and they conveyed a range of knowledge and human experiences. In some instances, particularly in harsh environments like Australia where certain information was key to survival, rigid methods of intergenerational knowledge transfer were in place. Essential knowledge, such as that for finding water and shelter, or for knowing what food was present where, was passed down along patriarchal lines but routinely cross-checked for accuracy and completeness between those lines.

But knowledge was also exchanged from generation to generation through song, dance, and performance. Geography and history in Aboriginal Australian societies were told as people moved along songlines, which were remembered routes across the land. Their memories were prompted by particular landforms. Even ancient rock art may have been created as memory aids, prompts to help storytellers recall particular pieces of information. Today many Aboriginal groups keep alive their ancient memories of songlines.

Such oral traditions could be viewed as “books” that were kept in the mental libraries of those who had actually heard and memorized them. Knowledge was passed on by “reading” those books out loud to young people, some of whom memorized them and would later “read” them to others. And so these ancient stories are still alive today — from memorable events like the formation of Crater Lake or the drowning of land along the Australian fringe to information about the names of places and their associations.

Now pause to consider what this means.

Humanity has direct memories of events that occurred 10 millennia ago. This conclusion runs against what many anthropologists and others have inferred about both the factual basis and the longevity of such oral traditions. Science more broadly has generally been dismissive of these, largely considering them anthropological curiosities, minutiae that define particular cultures. Now many of us are forced to look at ancient stories as potentially more meaningful. The preservation of extant oral traditions, in whatever cultures they may still be found, is imperative — they help define us all.

Patrick D. Nunn is a professor of geography at the University of the Sunshine Coast (Australia). This work first appeared on SAPIENS. Read the original here.