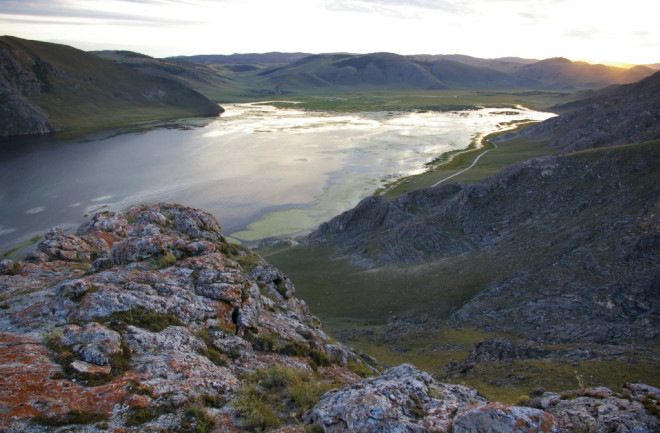 Genomic sequencing of a Paleolithic child found near Siberia's Lake Baikal has revealed important information about Native Americans' origins. Credit: Niobe Thompson. A long-running debate over the origins of Native Americans has taken a surprising twist on the shores of Russia's Lake Baikal. The genomes of two Paleolithic individuals — a 24,000-year-old juvenile and a 17,000-year-old adult — found at sites near the Siberian lake suggest Native Americans are more closely related to Western Eurasians than previously believed.

Previously, many researchers believed Native Americans were likely descended from earlier East Asian populations who traveled across land bridges now submerged beneath the Bering Straits. However the genome sequencing of the 24,000-year-old individual, known as MA-1, indicated that he was genetically most closely related to Native American lineages and to modern western Eurasians, but showed no clear relation to east Asians. That evidence, supported by the sequencing of a 17,000-year-old humerus from the same area, suggests a different scenario for the origins of Native Americans. Researchers believe the genome represents a point on our family tree after west Eurasian and east Asian lineages split, placing Native American lineages more firmly in a western branch. It now appears that western Eurasians were disbursed over a larger, more north-easterly area than previously known, and it was these early hunter-gatherers who eventually migrated to North America.

The authors estimate that about 14–38% of Native American ancestry might have originated from this western Eurasian stock, with the remaining proportion originating from east Asian populations. This could explain why skulls of some Native Americans bear features that do not resemble those of east Asians. MA-1 also represents the earliest known genome for an anatomically modern human, according to the research team's findings, published today in Nature. Genetic evidence of west Eurasian ancestry in modern Native Americans was previously assumed to be the result of European colonization of the Americas from the 15th century on. It now appears, however, that neither Columbus nor 10th century Viking explorer Leif Eriksen — not even traveling Irish monks back in the fifth and sixth centuries — can claim to be the first Eurasian to set foot on the New World.