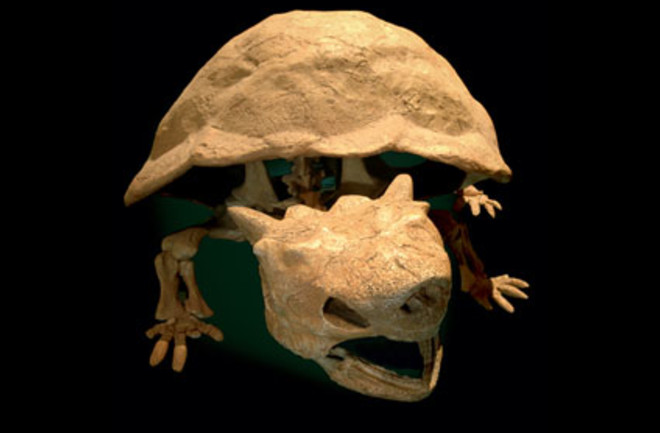 During the Pleistocene epoch animals thought big: It was the age of the megafauna, when creatures like the mammoth, an 8-foot-long beaver, and a hippopotamus-sized wombat walked the Earth. But these giants vanished one by one, and scientists have long wondered why.

Debate over what caused the megafauna to die out has raged for 150 years, since Darwin first spotted the remains of giant ground sloths in Chile. Possible causes have ranged from human influence to climate change in the past, even to a cataclysmic meteor strike. [BBC]

Now, a discovery on the South Pacific island nation of Vanuatu seems to have answered the question for at least one species. Researchers have turned up the bones of a giant land turtle in a dump used by the people who settled on the islands 3,000 years ago, and lead researcher Trevor Worthy says the evidence strongly suggests that the turtles were hunted into extinction.

Significantly, they have found mainly leg bones, but no head or tail remains, and only small fragments of shell. "This suggests very strongly that the animals were butchered somewhere other than in the village where we excavated them," says Worthy. "They just cut them up and brought back the bits that had most meat on them." [Australian Broadcasting Corporation]

All the species in this turtle family, the meiolaniids, were previously thought to have gone extinct 50,000 years ago, but the new find shows that at least one species (Meiolania damelipi) hung on in the isolated Pacific islands. The turtle's death knell seems to have sounded when the Vanuatu islands were settled by the Lapita people around 3,000 years ago. The researchers carefully dissected the layers of rubbish in the Lapita dump, and say the last bones of M. damelipi were found in sediment layer dating to 2,800 years ago. This suggests that the turtles were wiped out in the course of a few hundred years, according to the paper

published in the Proceedings of the National Academy of Sciences.

The Lapita would have hunted the slow-moving turtles, burned forests to clear cropland, and brought pigs and rats that ate their eggs. Worthy estimates that Vanuatu could have supported tens of thousands of M. damelipi, but in just 200 years they were gone. And if giant land turtles were on Vanuatu, they were likely found on other Pacific islands, and hunted into oblivion. [Wired]

80beats: A Clue to the Evolutionary Riddle of How the Turtle Got Its Shell