Ancient Romans Got Their Wood From as Far Away as France, Study Finds 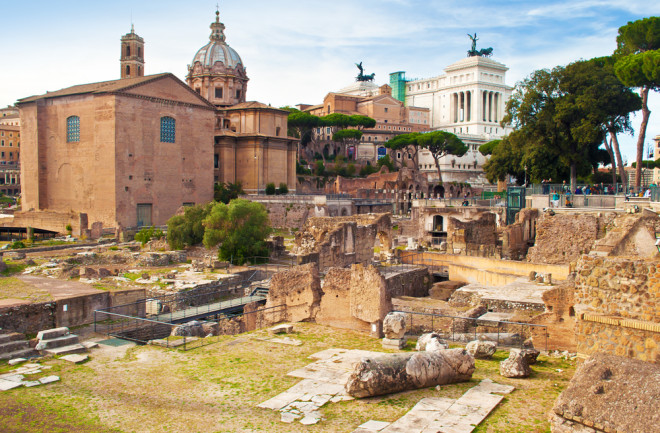 Ruins of a building from the Roman Empire in modern-day Rome (Credit: Shinedawn/Shutterstock)

At its peak, the Roman Empire stretched from Great Britain to Egypt and served tens of millions of people. Supporting that many people, and erecting the cities to house them, took massive amounts of stone, wood and other building materials. To feed their empire's ambitions, the Romans looked far beyond their Mediterranean homeland, researchers know.

Now, thanks to some unusually well-preserved planks unearthed in Italy, researchers now have a better sense of just how far Romans were able to reach for construction materials. Excavated in Rome during subway construction, the 24 wooden planks were part of a portico on a large estate, and likely came from northern France, over 1,000 miles away. That's a long distance for timber to travel, even today. But the real kicker? The wood was used for a foundation put underground, where no one could see it.

Some of the oak planks used for the study in the foundation of the portico. (Credit: Bernabei at al., 2019)

“When they found good-quality wood, it wasn’t a problem to fell the trees and transport them all over Europe,” says Mauro Bernabei, a dendrochronologist with the National Research Council in Italy who co-authored the PLOS ONE paper describing the research. The find hints that the Roman shipping industry was an even more well-oiled machine than researchers thought, as they were sourcing even the most mundane building materials from far away.

Archaeologists rarely find wood from ancient Rome. The material has to either be extremely dry or completely waterlogged to avoid rotting, Bernabei says. This timber was the latter. Once Bernabei was called in to take a closer look at "these beautiful planks," he measured the still-visible growth rings to get a sense of when and where the responsible trees were chopped down.

Spacing between tree rings depends on climate and growing conditions. When Bernabei compared the spacing patterns to those of other wood samples from the era across Europe, the closest matches came from oak trees in the Alsace and Burgundy regions of France. Workers likely felled the trees between A.D. 40 and 60, a date backed up by pottery shards found beneath the wood.

Bernabei couldn’t believe how far the wood traveled — he reached out to hundreds of archaeologists and dendrochronologists, asking if they had ever seen Roman wood travel so far. No one had. But Bernabei and his team figure that, based on current waterways, the wood could have reached Rome by floating down the Saone and Rhone rivers, across the Mediterranean and up the Tiber River into the city.

That’s a long trek for wood, but this find may inspire other archeological digs to take wood fragments seriously. “Knowing and studying wood is very important because it shows, maybe better than other materials, the incredible logistical material structure of the Roman empire,” Bernabei says. If other excavators give him or his colleagues a call, “I'm sure that there will be surprises.”