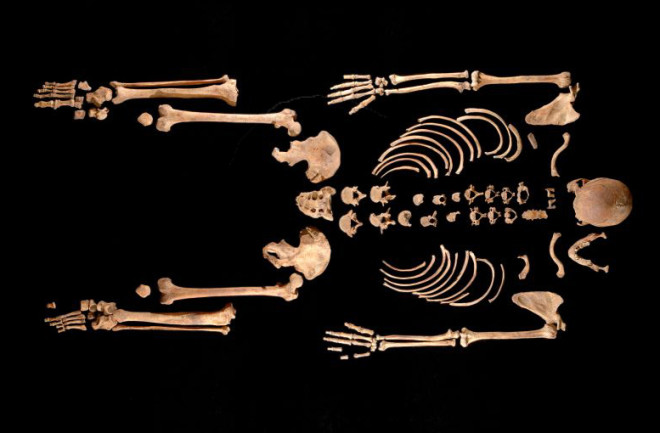 Researchers studied the ancient skeletons, including this one, of people who lived on the Iberian Peninsula over the past 20,000 years. Their discoveries reveal surprising insights into genetic influences over time. (Credit: Julio Manuel Vidal Encinas)

“It shows how tremendously powerful such transect through time studies are,” said Wolfgang Haak, an anthropologist at the Max Planck Institute for the Science of Human History in Jena, Germany, who led one of the two works. “Both studies should rather be seen as complementary chapters.”

During the last glacial maximum, ice covered much of Europe, and hunter-gatherers found refuge in the Iberian Peninsula. Yet researchers know little about the genetic ancestry of these people who lived there during this time some 20,000 years ago, or those who lived there for thousands of years afterward. To find out more, Haak and his team analyzed genetic sequences from the remains of 10 individuals, who lived in the region between 13,000 and 6,000 years ago. The scientists also looked at ancient DNA from another person found in northern Spain who lived 19,000 years ago. They found that, compared to neighboring regions, the hunter-gatherers of the Iberian Peninsula were moregenetically diverse.

Before this discovery, researchers thought Iberian’s ancestry was a tale of takeover. Earlier evidence suggested a group of hunter-gatherers known to researchers from the remains of a 14,000 year old individual found in Villabruna, Italy, had replaced another, distinct, group of hunter-gatherers researchers know of from a 35,000 year old skeleton discovered in Belgium. Instead, Haak’s team says the findings indicate both lineages survived in Iberia, the team reported Thursday in Current Biology.

“We were able to find solid traces of [a] lineage that was thought to have gone extinct in Europe,” Haak said. Hunter-gatherers of the Iberian Peninsula had mixed ancestry from both the Belgian- and Italian-associated groups.

he bodies of this Bronze Age woman and man were found at a castle in Ciudad Real, Spain. While his ancestry traces back to the Russian Steppe, she's genetically similar to Iberian people from the Late Neolithic period. (Credit: Luis Benítez de Lugo Enrich y José Luis Fuentes Sánchez/Oppida)

he bodies of this Bronze Age woman and man were found at a castle in Ciudad Real, Spain. While his ancestry traces back to the Russian Steppe, she’s genetically similar to Iberian people from the Late Neolithic period. (Credit: Luis Benítez de Lugo Enrich y José Luis Fuentes Sánchez/Oppida)

In a second study, Iñigo Olalde, a population geneticist at Harvard Medical School in Boston, Massachusetts, and a team of more than 100 scientists also try to trace back the genetic history of the Iberian Peninsula. They scrutinized the genomes of nearly 300 ancient Iberians that lived in the region over the last 8,000 years.

The team’s extensive analysis revealed that, beginning around 4,500 years ago, the ancestry of the Iberian people changes again. This time nomads with ancestry from the Russian steppe, a region that extends from the western edge of Russia east into Ukraine, wandered across Central Europe to mix with the Iberian people. Within 500 years, the groups had formed a relatively uniform population. So Iberians living some 4,000 years ago got about 40 percent of their ancestry from groups coming in from the Russian steppe and 60 percent from the local Iberian population, the researchers reported Thursday in Science.

“It is amazing to find that in 500 years these groups were able to make an impact in the whole peninsula,” Olalde said. But perhaps more amazing is that these newcomers replaced virtually the entire paternal lineage, according to the new research. When the researchers analyzed sequences found on the Y chromosome of Iberian locals and the Russian steppe newcomers, they found that the genetic sequences that were common before 4,500 years ago were replaced by just one lineage, known as R1b.

This lineage remains the common lineage in Iberia today. The discovery means, “most present-day males trace their paternal lineage to these Bronze Age newcomers,” Olalde said.

The researchers went on to show that by the Roman period, around the birth of the Common Era, the ancestry of the Iberian Peninsula had transformed yet again with ancestry from North Africa and the eastern Mediterranean.

Together, the complementary studies highlight the utility of ancient DNA to unlock the history human population movements around the globe.

“The application of the ancient DNA technology to the studies of prehistory is providing us with huge amounts of data that allows us to study how human populations in the past were biologically related to each other,” Olalde said. The advances may help to solve long-standing debates in archaeology.