Researchers have been able to place Gigantopithecus, at long last, within our extended primate family tree. 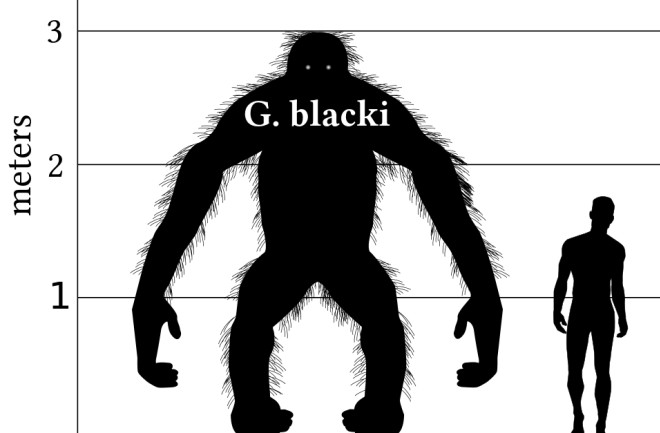 Artist’s rendering of how large Gigantopithecus blacki may have been. In life, G. blacki would have spent most of its time on all fours. (Credit: Wikimedia Commons)

There’s nothing small about Gigantopithecus blacki. The massive extinct animal likely rivaled a modern polar bear in size, weighing more than 1,000 pounds and standing nearly ten feet tall on its back legs.

The mystery around G. blacki is also super-sized. This largest of primates is known only from plentiful teeth and a few jawbones. For decades, speculation about its evolution loomed large.

But not anymore. Using a recently refined technique that’s already rewriting evolutionary relationships, researchers have been able to place Gigantopithecus, at long last, within our extended primate family tree.

While the finding is significant, what’s even more exciting is how the team arrived at this conclusion, and what it may mean for the study of evolution, including human origins.

Fragmentary G. blacki fossils, primarily from China, are 300,000-2 million years old. More than a thousand teeth have been found; from them, researchers have theorized that the animal was more than nine feet tall when standing on two legs — not that it did that very often. The large primate likely spent most of its time on all fours.

Previous research determined Gigantopithecus was likely quadrupedal because its jaws and teeth, while much larger, were similar to those of modern orangutans.

Now, a new study confirms — on a molecular level — that orangutans are indeed the closest living relative of this ancient giant. The research suggests Gigantopithecus split from the orangutan lineage about 12 million years ago.

Until recently, it was only possible to resolve lineages on such a high-resolution level using DNA. Ancient DNA, however, degrades quickly. Researchers believe that, even in optimal cold and dry conditions, the genetic material will not last more than a million years.

In the hot and humid conditions of Southern China, where most Gigantopithecus fossils have been found, DNA likely cannot survive more than 10,000 years.

Enter paleoproteomics, or the analysis of ancient proteins, which can last millions of years.

Researchers are able to extract these ancient proteins and sequence them in a way similar to DNA. Although the information retrieved is not nearly as detailed as a full genome, it can be enough to determine how closely other species are related, and from there retrace the animal’s evolutionary story.

Early paleoproteomic research focused on the single protein collagen, found in bones and other tissues. More recently, however, scientists have focused on tooth enamel, which contains multiple proteins. Each one, over time, accumulates subtle changes much like our DNA acquires mutations.

“Once we understood we carry proteins in enamel, it became clear that (it) could be used to look for differences, and to establish distances and relationships between species,” says Enrico Cappellini, a paleoproteomics specialist at the University of Copenhagen.

Cappellini, senior author on the new study, is also the lead author of a Nature study published in September that used the same technique to revise the rhino family tree. In that earlier paper, Cappellini’s team successfully sequenced the dental enamel proteome of a 1.77 million-year-old rhino from the Republic of Georgia. At the time, it was the oldest such proteome to be read.

In the new study, Cappellini and colleagues analyzed ancient proteins preserved in the enamel of a Gigantopithecus tooth that’s 1.9 million years old, making it the oldest dental enamel proteome to be sequenced, and the first from a subtropical environment. The molar was found in Southern China’s Chuifeng Cave.

The success of the work has opened a new door to studying evolution, allowing researchers to parse relationships between species going further back in time than DNA can survive, and especially in hot and humid climates — the very environments where our lineage evolved.

Paleoproteomics may also be the long-sought key to figuring out some of the most enigmatic members of our genus, particularly Indonesia’s “hobbit,” Homo floresiensis, and the Phillippines’ H. luzonensis, which have been found in environments where DNA has not survived.

The new G. blacki research is exciting for Gigantopithecus fans, but it’s also a glimpse into a paleoproteomic revolution that’s about to shake up the Tree of Life.