The discovery is latest success in a method that's revolutionizing archaeology and paleontology. 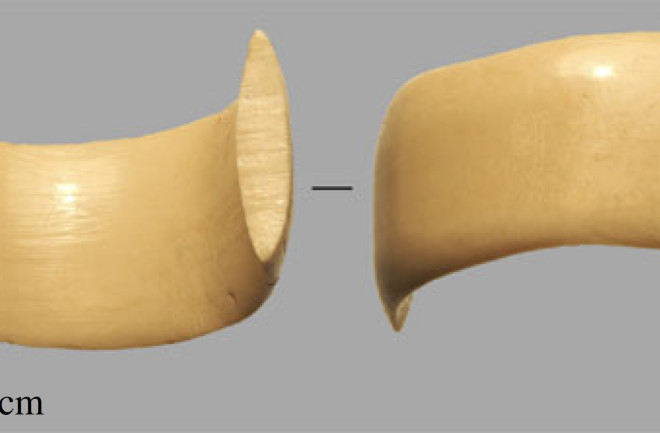 A photograph of the broken ring found in Syltholm, Denmark, and determined to be made of deer antler or bone. (Credit: Jensen et al)

Nearly 6,000 years ago, in what's now Denmark, a Neolithic crafter fashioned a ring from a piece of deer antler or bone. During the process, or soon after, the piece broke in two. It was apparently dropped — perhaps discarded in frustration — near other items, including a wooden spear that was also broken.

And there the ring waited, over time buried by debris and dirt, and eventually submerged beneath the sea.

After almost 6 millennia, the ring's time has finally come: Thanks to a new approach to understanding the past, researchers have been able to reconstruct much of its story, right down to the species of animal that provided the raw material.

While an achievement on its own, retelling the ring's story provides a snapshot of the dramatic way the fields of archaeology, paleoanthropology and paleontology are changing thanks to advances in a once-obscure field of study called paleoproteomics.

Proteins Shake Up Our Past

Much like ancient DNA analysis can reveal an organism's species and its relation to other populations past and present, paleoproteomics teases out subtle, molecular-level differences in fossils and artifacts.

The amount of information that ancient proteins can reveal is not as extensive or as detailed as the data stored in DNA. However, the proteins themselves are much hardier than genetic material, which can survive, at most, an estimated 1 million years — and that's in an ideal environment of consistent cold and low humidity.

Ancient proteins, on the other hand, can be preserved well beyond a million years. They also can be retrieved and analyzed from a wide variety of climatic conditions.

For example, in 2019, researchers used ancient proteins preserved in a 1.77-million-year-old rhino tooth, from a temperate climate site in the Republic of Georgia, to revise the animal's evolutionary family tree.

(Previous work succeeded in extracting proteins as old as 3.8 million years from ostrich shells, though extraction is only half the battle. The most recent technical improvements in the field have been in being able to read the ancient proteins more completely, particularly from tooth enamel, and then compare them with other collections, or proteomes.)

Also in 2019, researchers were able to extract and read ancient proteins from the fossilized teeth of Gigantopithecus, the largest primate that ever lived. The new analysis established how the species was related to its nearest modern kin, the orangutan. Even more importantly, the study served as a key proof of concept: Researchers successfully extracted the proteins from a Gigantopithecus tooth that was 1.9 million years old, and from a subtropical environment in Southern China. The achievement proved that ancient proteins can survive for millions of years even in hot and humid environments, where ancient DNA's expiration date is an estimated 10,000 years.

Ancient protein analysis even played a role in 2019's landmark announcement that a partial jaw found years earlier on the Tibetan Plateau was Denisovan, an evolutionary cousin of ours previously known from a single site in Siberia. Additional research is underway on ancient proteins preserved in fossils of other hominins, or members of our branch of the primate family tree.

Seen in the light of such groundbreaking work on fossils, the new research about the Danish ring may lose a little shine, but it reveals another significant way paleoproteomics is changing our understanding of the distant past.

Of course, further refinement is needed. The new study, for example, was able to determine that the ring was made from Cervus elaphus, known as red deer or, more specifically in North America, elk. But testing to determine whether the raw material was a long bone or antler was less conclusive, though the team believes it was more likely from an antler.

Pairing paleoproteomics with micro-CT scanning, as the team analyzing the ring did, allowed them to tell more of the artifact's story. For example, a lack of microwear on the ring suggests it was worn for a short period of time or not at all — the break hints that it never made it out of the crafter's workspace.

Aside from cutting-edge techniques used to analyze the ring, old-school spade and shovel archaeology played a crucial role as well. Shallow seas covered the Danish site of Syltholm for centuries until a late 19th century land reclamation project. Dams built in the area exposed an ancient settlement that dated from about 6,300 years ago until roughly 5,500 years ago, when seawater likely inundated the site — possibly part of the same gradual sea level rise that claimed the now-submerged European region known as Doggerland.

If Syltholm sounds familiar, you may remember another recent find from the site: In 2019, researchers were able to reconstruct the entire genome of one of its inhabitants based on a piece of birch pitch "chewing gum" she discarded.