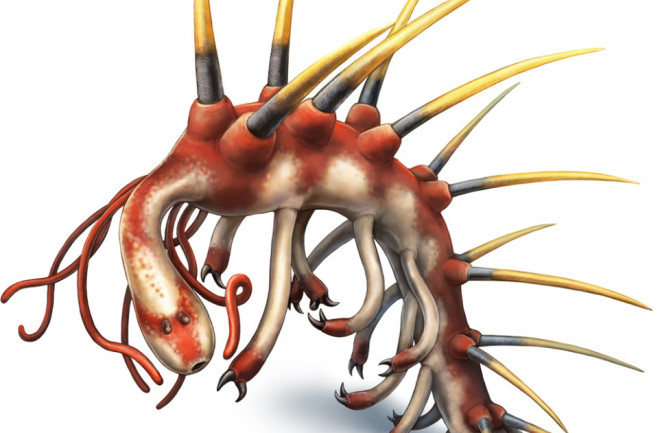 A color reconstruction of Hallucigenia. (Credit: Danielle Dufault) If you think this ancient, spiky creature is bizarre, you’re not alone: For years, scientists have struggled to figure out exactly what it is, or was — until now. Scientists recently unearthed spectacular fossil remains of Hallucigenia sparsa, a fierce-looking worm species that lived 508 million years ago. The fossils helped paint the most detailed picture to date of Hallucigenia, yielding important insights into the evolution of modern-day arthropods like insects and arachnids.

We’ve come a long way since Charles Doolittle Walcott first described Hallucigenia in 1911 — he originally named the species Canadia sparsa. Decades later, Conway Morris conducted the first thorough examination of the creature in 1977 and determined it didn’t belong to the Canadia genus. He renamed the worm because of its “dreamlike” appearance. However, there was one problem: He reconstructed the species upside down, as well as back to front.

In the 1990s, researchers correctly reoriented Hallucigenia, but because of limited fossil evidence, they couldn’t study its head in detail. Since scientists couldn’t get a good look at Hallucigenia’s head parts, it was difficult to determine how it fit into a large animal group called ecdysozoans. In other words, Hallucigenia represented a missing link in the evolutionary history of arthropods.

In a study published Wednesday in the journal Nature, scientists describe new Hallucigenia fossil material unearthed from the Burgess Shale of Canada. The exquisite remains allowed scientists to redescribe the species since Hallucigenia’s important head and mouth features were observable. Hallucigenia’s head is dotted by two simple eyes and rests at the end of a long neck. Scientists also identified its mouth and a foregut with plates and circular teeth. Basically, this was enough evidence to reaffirm Hallucigenia’s distant link with arthropods. To toss a cherry on top of their findings, scientists also reconstructed Hallucigenia in 3-D, and reconstructed its walking gait.

Hallucigenia was a carnivorous marine creature that fed on sponges and organic debris, and grew to be about 10 to 50 millimeters long. It’s also possible that the prickly creature scavenged on decaying animal remains. Its spines were likely protection from other predators. So after all these years, we finally got our close-up of this ancient worm. But in all honesty, it’s nightmare fuel.