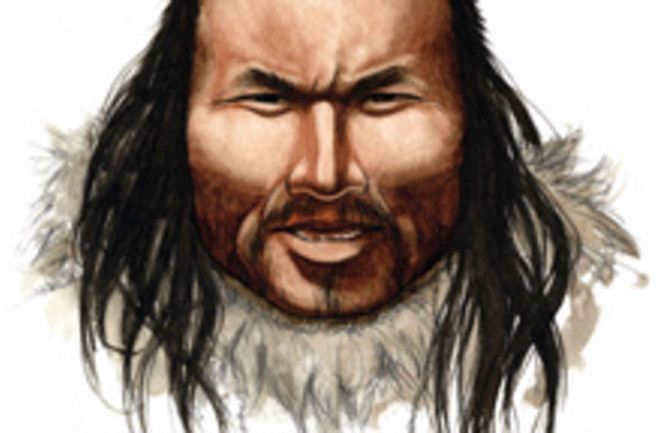 Have you seen this man? Probably not: He lived 4,000 years ago. The image to the left is not a wanted poster, but rather an artist's impression of Inuk, the name given to him by the scientists who sequenced his genome. It's the first time the genetic code of an ancient human has been deciphered this completely, and the researchers published their results this week in Nature. Inuk died on an island off Greenland called Qeqertasussuk. Researchers don't know the cause of death, but they do know he left bits of hair and bone that the permafrost preserved. Scientists found the thick clumps of hair—which could be the remnants of a 4,000-year-old haircut—in the 1980s, and stored them in the National Museum of Denmark. Today's DNA sequencing technology allowed them to look back in time at what he may have been like.

. And, as DISCOVER covered the last time ancient hair from Greenland was in the news, Inuk's genome also injected a surprise into the contentious debate over which groups of early peoples migrated to the Americas, and when. Inuk's people, the Saqqaq, are the first known humans to have lived in Greenland.

The origins of the culture are hotly debated by scientists, though most believe the Saqqaq's ancestors were migrants from neighbouring populations, such as the Na-Dene of North America or the Inuit of the New World Arctic [The Guardian]

. Not so, say the Inuk researchers. They say he was more closely related to people of eastern Siberia. However, since the Bering land bridge was long gone by the time Inuk's people split from the Siberians 5,500 years ago, the researchers suggest they may have moved via boat or winter ice first to Alaska, and then across the Arctic to Greenland. Since Inuk seems to have had plenty of hair despite his genome containing the codes for baldness, the researchers propose that he died young. Ancient hair is hard to find, but when scientists do unearth samples, they're extremely helpful.

Unlike the DNA found in ancient skin or bone, genes housed in hair can be recovered relatively free of contamination from the genes of fungi or bacteria [National Geographic]

. Thus, the Inuk team says it was able to accurately decode about 80 percent of his genome. Related Content: 80beats: We May Soon Be Able To Clone Neanderthals. But Should We? 80beats: Was Europe Occupied By Cannibals 7,000 Years Ago? 80beats: Ancient Hair Reveals Origin of Early Greenlanders 80beats: A Woolly Mammoth Evolutionary SmackdownImage: Nuka Godfredsen