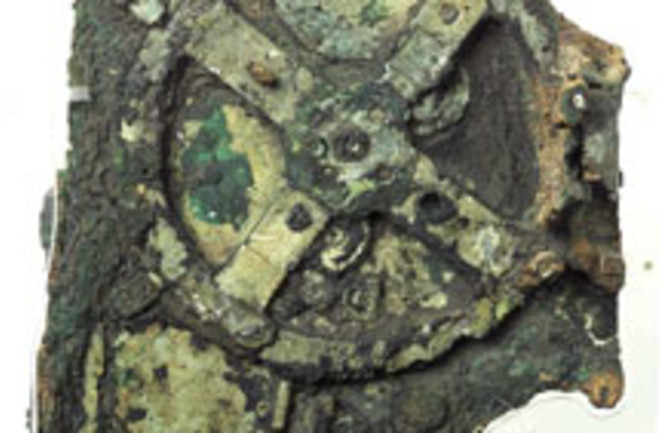 In 1901, divers recovered a shoebox-size, gear-filled box from a 2,000-year-old shipwreck on the floor of the Mediterranean Sea. Ever since, the enigmatic box—known as the Antikythera Mechanism—has spawned its share of bizarre theories. "Some people thought it came from outer space," scoffs Athens University physicist Yanis Bitsakis. "And since the mechanism has Greek writing on it, the other ridiculous story is that Greeks themselves came from outer space and brought the mechanism with them." More sober minds suggested the box was a clock or a navigational device, but even those interpretations rested on skimpy evidence.

Now an international team of researchers claim they have found the answer. Three-dimensional scans of the machine's innards, taken last year by an eight-ton "microfocus" X-ray machine built around the mystery object, revealed ancient inscriptions and complicated gear trains that gave away the machine's purpose. "It's an all-in-one astronomical device," says Bitsakis, who spends up to 15 hours daily deciphering the inscribed text. "In a single machine, the designer tried to put all the knowledge he had about astronomical phenomena."

The 30-odd bronze gears and 2,000 inscribed Greek characters in the Antikythera Mechanism helped ancient Greek scientists track the cycles of the solar system and calculate the motions of the sun, the moon, and the planets. According to Cardiff University astrophysicist Michael Edmunds, the box technically qualifies as a computer. "To build one of these is not trivial," he says. "It shows how technically advanced the Greeks were."