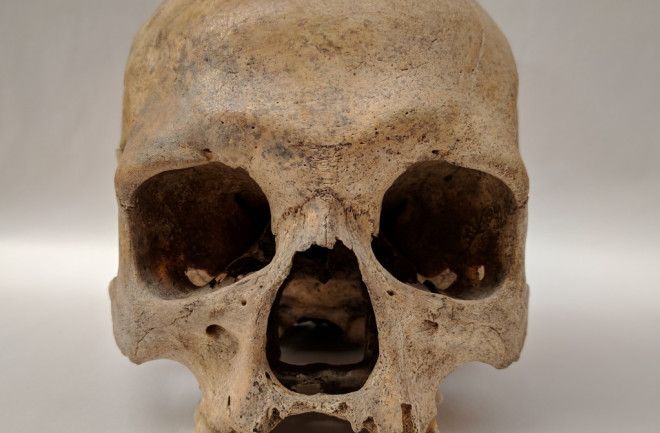 Signs of leprosy mark a skull found in a Danish cemetery in use from the 13th through 16th centuries. (Credit Dorthe Dangvard Pedersen)

One of the most dreaded diseases for millennia, leprosy is still with us — though it has lost much of its menace. But some of its mystery remains, particularly its origins. In a study out today, researchers turned to ancient DNA to discover leprosy’s roots, and the path they followed took them to a surprising place.

Leprosy results from a chronic bacterial infection, almost always of Mycobacterium leprae. It typically takes five years after initial infection for symptoms to show up.

The good news is, despite the long incubation period, leprosy is not highly contagious. The World Health Organization notes that 99 percent of the global population has natural immunity to it and, even if you’re in that unlucky one percent, it can be cured with a combination of fairly affordable drugs. At least, that’s true in the 21st century.

Earlier in human history, there wasn’t any good news about leprosy.

It was thought to be extremely contagious and people with symptoms of it were ostracized or shipped off to remote, often bleak locations. There also wasn’t much to do about symptoms, which started out fairly benign (odd colored patches on the skin) but progressed to become highly debilitating, including severe damage to nerves and vision.

Contrary to popular lore, M. leprae itself doesn’t eat away your body. Instead, the damaged nerves no longer send appropriate warnings about infection and injury to the brain, and the body’s natural system of self-policing breaks down, often resulting in severe tissue loss that, along with the other damage, can be fatal.

Back To The Beginning

About 200,000 people are still infected with leprosy each year, mostly in impoverished and tropical areas. Those who receive the multi-drug treatment will be effectively cured of the disease, without any permanent disability if it’s diagnosed early enough.

But despite having a better understanding of how to treat it, science is still a little fuzzy on where leprosy originated.

Previous research identified a number of different, generally geographically isolated strains through history. Only two of the strains known, for example, were found in Europe.

A 2005 study on leprosy’s origins concluded that it likely arose either in East Africa or the Near East, and spread with our species during waves of human migration across the globe.

Today, however, researchers took another look at the question of origin and found a new answer.

The team sequenced ancient DNA from M. leprae samples identified among nearly a hundred Europeans who lived between the fifth and fifteenth centuries. The individuals were selected for inclusion in the study based on skeletal deformations consistent with leprosy.

The researchers were able to reconstruct ten genomes of M. leprae from the samples, including the oldest M. leprae genome known, from Great Chesterford, England, dating to somewhere within the early fifth to middle sixth century.

Fun fact: That oldest M. leprae genome turns out to be the same strain found in infected red squirrels in England today, suggesting that contact with squirrels and the squirrel fur trade may have had a role in spreading the disease back in medieval times, according to the authors.

The European M. leprae genomes sequenced in the study represent all the known strains, including those not previously found in Europe and thought to exist only on other continents. In fact, three different strains of the bacteria were found in just one medieval cemetery in Denmark.

The key finding from today’s research is that the addition of ten new M. leprae genomes to the field’s database gives us a finer-scaled snapshot of the disease’s past.

The earliest historical reference to leprosy comes from India and dates to about 600 B.C., while skeletal remains believed to show signs of the disease, also from India, have been dated to 2000 B.C.

By analyzing changes in the different strains’ genomes over time, the new study determined that their last common ancestor — the mother of all M. leprae, if you will — existed at least 4,000 years ago, which suggests that the ancestral strain of the bacteria has been around even longer. But where did it come from?

The fact that the highly diverse strains were all isolated from Europeans means that the birthplace of leprosy is not as clear as the earlier research suggested. In fact, based on their analysis, the authors of today’s study say it’s possible that the disease first reared its ugly head in Europe.

Much like the paper out yesterday on the hepatitis B virus isolated from ancient DNA, this new research delves into the past to give scientists a clearer picture of diseases that continue to plague us in the present.

The new research appears today in PLOS Pathogens and is open access, so enjoy.