Two discoveries in 2014 settled a contentious debate in archaeology. 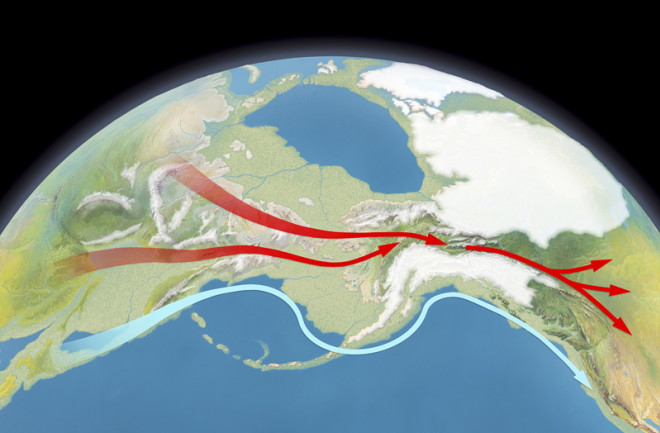 Sign up for our email newsletter for the latest science news
In the Hoyo Negro cave, diver Susan Bird works on the skull of Naia, whose DNA is over 10,000 years old. | Paul Nicklin/National Geographic

A toddler boy and a teenage girl have settled a contentious debate in archaeology more than 12,000 years after their deaths.

In February, researchers published the first ancient American human genome, sequencing DNA from the remains of a boy known as Anzick-1, who was buried about 12,600 years ago in what is now western Montana. The child’s genes proved conclusively for the first time that Native Americans are descended from an Asian population that migrated across Beringia — a land bridge now submerged between Siberia and Alaska — at least 15,000 years ago.

“The archaeological and genetic stories are beginning to mesh,” says Mike Waters, an archaeologist at Texas A&M University and a member of the Anzick-1 team. “It’s been a long-held belief that the First Americans gave rise to Native Americans, but having the genetics verified that there were direct or close ties.”

Particularly satisfying to Waters, the findings refute a competing theory about First Americans. Based on similarities in tool design between the American Clovis culture, to which Anzick-1 likely belonged, and that of a southwestern European Ice Age culture, some researchers had been promoting the Solutrean hypothesis: that the Americas were first settled by Europeans who crossed the Atlantic, possibly in skin kayaks.

A child's remains were found at the base of this cliff in Montana, along with Clovis tools. | Michael Waters

“Anzick clearly shows direct descendency — and continuity — of Native Americans all the way back to Central Asia,” Waters says. “The Solutrean ship has sunk.”

Anzick-1’s resting place is the oldest credible burial site found in the Americas — and the only one associated with the Clovis culture, known in particular for its fluted spear points. The child’s remains were found in 1968 during construction on land belonging to the Anzick family.

Recognizing the find’s scientific significance but aware of Native American cultural sensitivities, the family kept the remains secure for more than 40 years. They turned down several requests to study Anzick-1’s remains until they were approached by Waters and University of Copenhagen paleobiologist Eske Willerslev.

Sequencing Anzick-1’s genome was no easy task, according to Willerslev. “Without a doubt, this was the most demanding genome to date that I have ever sequenced,” he says. “With Anzick-1, there was a tremendously low amount of human DNA left — less than 2 percent. The rest was microbial [contamination].”

Although Willerslev is accustomed to sequencing ancient DNA samples in about a year, it took him more than three years to sequence Anzick-1’s genome because of the DNA’s poor condition and his desire to deep sequence the material, repeating the process multiple times for the most accurate results.

Those results were impressive: Anzick-1’s genome showed his people were directly ancestral to 80 percent of Native Americans stretching from the Pacific Northwest to southern Chile. And the boy was closely related to the other 20 percent, groups living in Arctic Canada and Greenland.

Meanwhile, in an underwater Mexican cave, the skeleton of a girl, whom researchers call Naia, was revealing secrets of her own.

According to a study published in Science in May, the sequencing of Naia’s mitochondrial DNA — dated between 12,000 and 13,000 years old — confirmed a shared genetic lineage with modern Native Americans.

Unlike Anzick-1, Naia’s remains — the most complete skeleton of an ancient American ever found — include the skull. The teenager, found in the Yucatan Peninsula’s Hoyo Negro cave, had a prominent forehead, narrow face and wide-set eyes. These facial characteristics are seen on most of the other ancient American skulls known to researchers but are not associated with modern Native Americans, a disparity that had fueled alternate theories of the continent’s first settlers. But Team Naia found no genetic evidence that the girl was related to any other population.

The difference between Paleoamerican and modern Native American facial features is likely a combination of additional waves of migration from Siberia, via Beringia, and genetic drift, a gradual change in appearance and other traits as populations divide, migrate and adapt, says Jim Chatters, a Seattle-area anthropologist who led the multinational study of Naia.

“Anzick and Naia say the same thing, that you have Beringians here very early,” Chatters says. “They are two different pieces of a puzzle that’s producing one picture.”