Ancient Flood Left Its Mark in the Mediterranean Sea 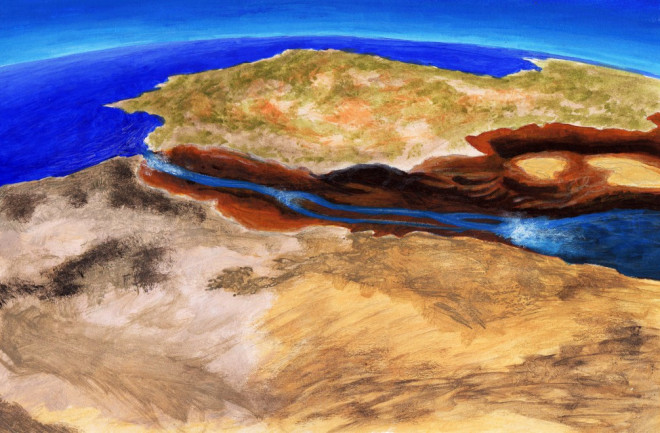 An artist's interpretation of the Zanclean flood. (Credit: Wikimedia Commons) One of the largest floods in Earth's history may have deluged the Mediterranean Sea more than 5.3 million years ago, leaving behind a mass of debris roughly the size of Greece's largest island, Crete, researchers say. Scientists investigated a roughly 640,000-year span of time starting nearly 6 million years ago when the Mediterranean became a hyper-salty lake. This so-called Messinian salinity crisis "was the most abrupt environmental change, at a planetary scale, since the end of the Cretaceous — that is, a sudden mass extinction, including dinosaurs, due to a meteorite impact," said study lead author Aaron Micallef, a marine geoscientist at the University of Malta. This event happened because the Mediterranean became isolated from the Atlantic Ocean. The dry climate of the region caused the Mediterranean to evaporate almost completely, with sea levels there dropping by up to 7,800 feet. During this time, a layer of salt up nearly 1 mile thick was deposited at the bottom of the Mediterranean Sea, equivalent to 5 percent of global salt mass of the oceans. "The Messinian salinity crisis thus reduced global ocean salinity and had an impact on ocean circulation, ice formation and, thus, climate," says Micallef. Previous research suggested the Mediterranean was abruptly restored back to a normal sea at the end of this event. One theory to explain the refilling of the Mediterranean was a catastrophic flood through what is now the Strait of Gibraltar. During this so-called Zanclean megaflood, prior work suggested that 90 percent of the Mediterranean refilled within a few months to two years, with the sea's waters rising by up to more than 10 meters per day. Until now, conclusive evidence of debris from this megaflood had eluded scientists. To look for the aftermath of this catastrophe, Micallef and his colleagues analyzed the boundary between the western and eastern Mediterranean Sea, which is marked by a 155-mile-long and more than 1-mile-high limestone cliff called the Malta Escarpment. "If the Zanclean flood did ever occur, it should have left a mark either on this cliff, or at least at its base," says Micallef.

The scientists examined the most comprehensive collection of seafloor data yet from offshore eastern Sicily and the Maltese Islands, which research vessels gathered using sonar over the course of five years. That is where "we found our evidence — a wide seafloor canyon and an extensive buried mass of material," Micallef said. The scientists detailed their findings in the journal Scientific Reports. The buried mass of material is equivalent in size to Crete and nearly 3,000 feet thick in places. This mass is consistent with material eroded and transported by a megaflood passing from the western to the eastern Mediterranean via a southeastern Sicilian gateway. The researchers suggested the Zanclean flood resulted in a waterfall five times the height of the Eiffel Tower. This water carved a canyon 3 miles wide and 12 miles long that is still preserved underwater off the southeastern Sicilian city of Noto. "We may be dealing with the one of the largest floods that ever occurred on our planet," Micallef said. For example, some of the largest known terrestrial megafloods occurred at the end of the last ice age at Missoula in what is now the western United States, and Altai in central Asia, discharging an estimated 2.7 million, 10 million, and 900,000 cubic meters per second, respectively, Micallef said. In comparison, the Zanclean flood discharged "up to 130 million cubic meters per second," he noted. The researchers have not yet been able to directly analyze rocks from the Zanclean megaflood debris because those deposits "are buried beneath hundreds of meters of sediment at water depths of 3 kilometers," Micallef said. He and his colleagues are now planning to drill into those rocks and computationally model the megaflood to shed more light on the catastrophic event.