The Egyptians mummified millions of ibises as offerings to the god Thoth. Now, scientists look at where all those birds came from. 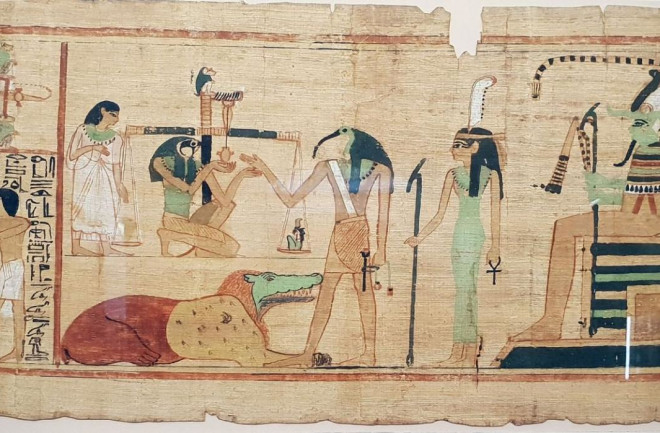 Scene from the Books of the Dead (The Egyptian museum) showing the ibis-headed God Thoth recording the result of the final judgment. (Credit: Wasef et al, 2019)

Ancient Egyptian catacombs stretch for kilometers underground. Branching off of the tunnels are rooms, and those rooms are stacked to the ceilings with jars holding more than 1 million mummified African sacred ibises.

Egyptians buried millions of these leggy, long-beaked birds as prayer offerings to Thoth, the god of wisdom and writing. Early archaeological work and snippets of ancient texts made most historians think these birds were raised in captivity somewhere near the catacombs. But a new analysis, published in the journal PLOSOne, of DNA from the mummified birds shows that the ibises were likely caught in the wild.

The finding is backed up by a suspicious dearth of any archaeological evidence of an ibis farm. Structures meant to mimic breeding grounds, for example, are absent, an indication that ancient Egyptians weren’t bird herding, says study coauthor Sally Wasef, an ancient DNA expert at Griffith University in Australia. The 14 genomes the team extracted are also the first complete nonhuman DNA pulled from Egyptian mummies. Their feat opens the door for similar investigations into cats, dogs and all the other creatures that got the mummification treatment.

To see how the ancient ibises related to one another, the research group collected bone, blood, tissue and toe pad samples from 40 different mummies, and extracted entire genomes from 14 of them. Wasef and her team also collected feather and blood samples from 26 ibises living in the region to see if there were major differences between the buried birds and those alive today. Through what Wasef describes as a “fishing” technique, the team used segments of modern DNA to search for and connect with matching pieces of the ancient genome.

A sacred ibis; the birds are native to northern Africa. (Credit: Dave Montreuil/Shutterstock)

If the ibises were bred in captivity, their DNA would be more similar to each other, and might carry mutations passed down through inbreeding, Wasef says. Instead, the ancient ibises’ genetic diversity aligned more with that of living birds. Egyptian texts referencing the feeding of ibises were one reason historians thought the sacrificial birds were farmed. But this finding might suggest a new interpretation, Wasef says. Maybe the birds were fed in the wild, or tamed in the short-term. “I imagine the job of catching those birds, even if feeding them in the wild, would be very hard,” Wasef says. “An ibis is not a chicken, where you can catch it quickly.”

The team only looked at mitochondrial DNA, a set of genetic information separate from what lies in the cell nucleus. This DNA comes exclusively from mothers, so the team wants to extract and examine nuclear DNA to see if their theory holds up when examining paternal genetic information, too. That DNA would also clue the team into how this bird species has evolved over time, and possibly how old the birds were when they were sacrificed, Wasef says.