Ancient Ducks Honked and Quacked Just Like They Do Today 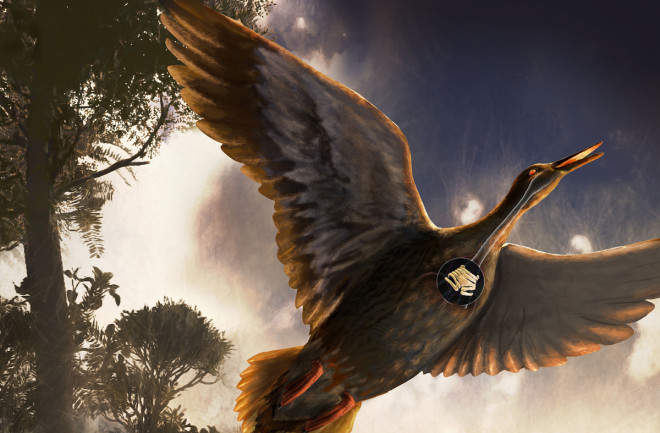 An artist's reconstruction of Vegavis iaai, with the location of the syrinx shown. (Credit: Nicole Fuller/Sayo Art for UT Austin) If you were walking around Antarctica toward the end of the Cretaceous 66 million years ago, you may have heard a very familiar sound: the riotous honking of ducks. That's the conclusion of an analysis of the oldest bird vocal organ ever discovered. Although it may predate modern birds by over 60 million years, it nevertheless bears striking similarities to the fleshy folds and cartilaginous rings that ducks use to communicate today. The find pushes back the evolution of modern-looking avian vocal organs to the time of the dinosaurs and promises to shed light on how they first evolved and changed through the ages.

In a paper published Wednesday in Nature, lead author Julia Clarke and her co-authors used computed tomography (CT) to scan the fossil of an ancient duck ancestor called Vegavis iaai discovered in Antarctica. Clarke was responsible for naming the species back in 2005, based on fossils collected by a team of Argentinian researchers in Antarctica in 1992. Now, working with a more complete fossil of the bird, also collected by the Argentinian team, Clarke was able to construct a 3-D rendering of the syrinx, an avian organ analogous to our vocal cords. Unlike in mammals, where air flows over taut strings to produce sounds, birds rely on a combination of stiff rings and soft folds of vibrating tissue to create honks, trills and chirps. Compared to our vocal cords, the syrinx is located much deeper in the throat, and is divided into two tracts leading down to the lungs. In some birds, like ducks, these passages are asymmetrical, which allows them to produce different kinds of sounds. The syrinx operates as a collaboration between the bony rings and the soft tissues, and by comparing each structure separately to an analysis of 12 modern birds, Clarke was able to conclude that they were quite similar. This means that ancient birds may have produced honks and quacks that sounded much the same as those of ducks and geese today.

A comparison of the fossilized syrinx (foreground) to a modern-day duck syrinx (left), and the vocal organ of a modern-day alligator (right). (Credit: J. Clarke/UT Austin)

No Link to Dinosaurs

For those hoping that this new find will help us shed light on how the dinosaurs sounded, though, you're out of luck. While birds may be descended from dinosaurs, it seems that they didn't inherit the syrinx from them. "We think that most dinosaurs didn’t have this setup that we see in Vegavis and more derived modern birds," says Clarke. In fact, we have very little information about what dinosaurs actually sounded like, because their vocal organs didn't survive as fossils. A recent study that Clarke collaborated on indicated that they may have cooed and hooted, but we don't know for certain. Without a syrinx, they almost certainly didn't sound like modern birds, however. Whether or not the syrinx was somehow related to the development of flight remains to be seen. It almost certainly developed after birds had already taken to air, however. The fossil record indicates that birds had gained feathers and wings long before their unique voice boxes. The dearth of ancient syrinxes make answering these questions difficult, however. Only one other syrinx older than a few million years has ever been discovered. This makes for a puzzling quandary: clearly the structures can be preserved, yet we have found so few of them. Clarke thinks that there are likely more of them out there, perhaps even in fossils that we've already found. The syrinx she studied is from a fossil originally found in 1992, after all. There's still more work to be done before we have a precise model of the ducks of the Cretaceous, however. "There are things we need to understand about living birds at present, and until we understand those relationships in living birds, were not going to have a precise model," says Clarke. In other words, to understand the past, we need to understand the present.