The species, dubbed Aurornis xui, is the most primitive bird known. 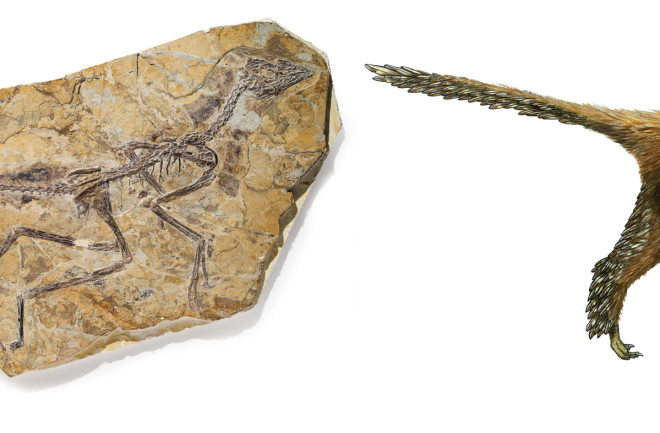 A fossil from the ancient Aurornis xui (left) shows that the bird was the size of a modern-day chicken (right) and could help explain the evolution of birds. | Thierry Hubin/RBINS; Jonica Dos Remedios/RBINS

Last May, researchers unveiled the chicken-size dinosaur-like Aurornis xui. The fossil depicts the most primitive bird documented so far, though maybe not the oldest, as first suspected.

Researchers bought the specimen from a dealer and are determining whether the bird is 160 million years old, as claimed — or if it is actually 35 million years younger.

No matter its age, the new fossil sheds light on how dinosaurs evolved into birds, says study co-author Andrea Cau of the Museo Geologico Giovanni Capellini in Italy. Most of its features — the length of its forearms, the shape and details of its skull — “are in fact intermediate between other dinosaurs and more recent birds,” he says.

Some are plain surprising: That hook-shaped hip bone? “Bizarre,” says Cau, who calls it “a beautiful specimen.”

[This article originally appeared in print as "A Really Early Bird."]