The find is the first evidence for feather-munching parasites among dinosaurs. 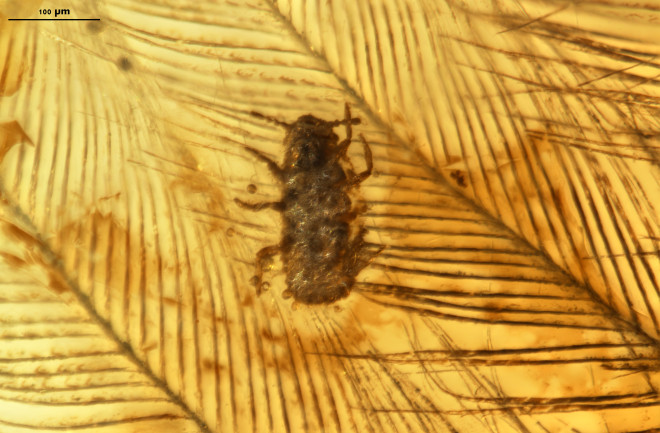 Lice today are the bane of furry and feathery animals, nibbling on pelts and plumage and causing a general nuisance. It seems that feathered dinosaurs may have had a similar problem.

In two recently discovered pieces of amber, a total of 10 lice lie next to dinosaur feathers riddled with bite marks from the parasite, according to a new paper published in Nature Communications. The researchers named the newly discovered species Mesophthirus engeli.

The bits of honey-hued fossilized tree sap were collected in Myanmar, dated to between 145 million to 65 million years old, and are the first evidence that feathered dinosaurs dealt with licelike parasites, says study co-author Chungkun Shih, a researcher with the Smithsonian Institutions's National Museum of Natural History. “Even if it is just feather chewing, no hosts like to have parasites,” he says.

Before Shih and his team looked at these amber fragments, the earliest known prehistoric louse came from Germany. It was a rock fossil dated to be about 44 million years old. But the specimens Shih and his colleagues identified are tiny — less than 0.2 millimeters long. For a parasite that small to be preserved with enough detail for researchers to analyze, amber is really the only option, Shih says.

Thanks to a collector in China who donated some of his amber to a university, Shih and his colleagues got their hands on the perfect samples. High-power photography and close-ups of the images showed the 10 tiny creatures have four teeth on either side of their pincer-like jaws, ideal for feather chomping. If they had been blood suckers, they’d have a mosquito-like siphon, Shih says. Their meal of choice was confirmed by the holes in the feathers, which look a lot like the kind today’s feather-chewing lice inflict on their avian victims. The lice also have antennae and a body shape similar to current species, but are probably a separate species altogether.

Since this is the oldest evidence of bird or dinosaur feather lice found, the specimens don’t say much about parasite evolution, Shih says. More prehistoric remains will have to be found for researchers to build a timeline of their changing bodies. But it's clear animals have coped with the pests for a long time.

There are also issues surrounding amber research itself. The recent and fantastic finds in the fossilized material are due, in part, to increased mining in amber-rich regions like Myanmar and Burma. The mines are often unsafe and put young workers in danger, and the conditions have been severe enough that some researchers have stopped getting their samples from these and other amber regions. While Shih and his team got their samples from a private collector’s cache, he hopes amber-sourcing conditions improve elsewhere.