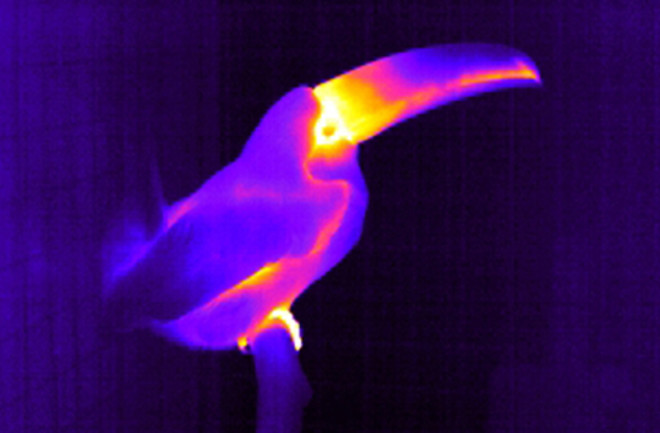 The toucan's big beak has been an object of fascination for centuries: In the late 1700s a French naturalist called it a “grossly monstrous” appendage, and later Charles Darwin contemplated its possible purpose.

Why should the bird have a beak that accounts for 40 percent or more of the total surface area of its body? Among the suggestions are that it is useful for peeling fruit, for attacking other nests or as sexual ornamentation [The New York Times].

Now a new study has revealed the beak's true purpose: It serves as a giant air conditioner, helping the bird keep cool.

Animals have a range of ways including layers of fat in polar bears and large skin surfaces in elephants to stay cool or keep warm in harsh environments. [Lead researcher Glenn] Tatersall and colleagues found the toucan can lose up to four times as much heat from its beak than it produces at rest -- the most reported for any animal [Bloomberg].

The researchers found that the toucan's bill beats out the elephant's ears in its ability to change the animal's body temperature; it can rapidly adjust the internal thermostat by as much as 27 degrees Fahrenheit, Tattersall says. The toucan has a network of blood vessels in its beak, and researchers say that network is the crucial air conditioner component.

Tattersall said: "By altering blood flow to the bill's surface, toucans can conserve body heat when it is cold or cope with heat stress by increasing blood flow. "Essentially, the large surface area of the bill, and the fact it is not insulated, means that the blood flowing through is able to release heat into the bill, thus cooling the bird. This blood-derived heat in the bill is then dissipated into the air [BBC News].

For the study, which will be published tomorrow in the journal Science, the researchers studied the South American toco toucan by keeping the birds in a temperature-controlled chamber and imaging them with heat-sensing cameras while gradually changing the room's temperature.

They found that below an ambient temperature of about 60 degrees Fahrenheit, the bill was relatively cold, indicating that the blood vessels to it were constricted. But above that temperature blood flow to the bill increased. “The animal is dumping the heat, using the bill as a thermal window,” Dr. Andrade said [The New York Times].

Related Content: 80beats: To Read the Brain of a Pigeon, Scientists Outfit It With a “Neurologger” 80beats: Couple That Saw Quick Evolution in Darwin’s Finches Wins Big Prize 80beats: When a Hummingbird Goes Courting, He Moves Faster Than a Fighter Jet 80beats: Not So Bird-Brained After All: Rooks Make and Use Tools 80beats: Mockingbird to Annoying Human: “Hey, I Know You”Image: Glenn Tattersall