Astronomers reviewed archived Kepler data and found evidence for a previously overlooked, Earth-like planet. And it seems to have some of the right conditions for life. 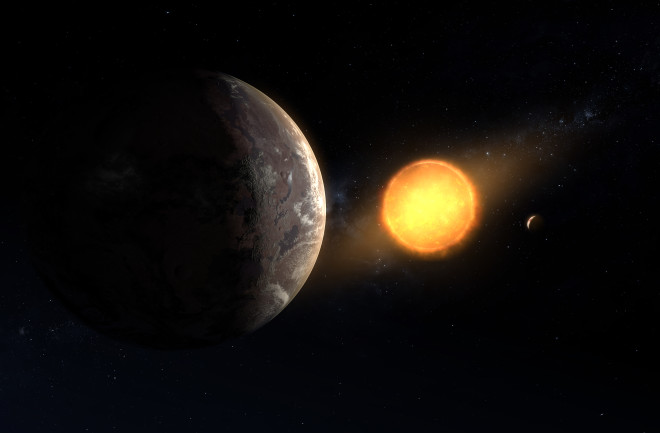 An illustration of Kepler-1649c orbiting around its host red dwarf star. This newly discovered exoplanet is in its star’s habitable zone and is the closest to Earth in size and temperature found yet in Kepler's data. (Credit: NASA/Ames Research Center/Daniel Rutter)

Buried in data from the now-defunct Kepler space telescope, astronomers have uncovered an exoplanet some 300 light-years away that could be a promising home for alien life. The world, named Kepler-1649 c, is just a touch larger than Earth, but instead of orbiting a Sun-like star, it circles a tiny red dwarf, a class of stars known for throwing violent tantrums. But despite living near a potentially hostile host, Kepler-1649 c sits in the star’s habitable zone — where liquid water can exist on the planet’s surface.

At just 106 percent the diameter of Earth, the newfound exoplanet receives about 75 percent of the starlight that we receive from the Sun. These two factors make it a particularly promising candidate for hosting hypothetical life. And by studying Earth-like planets such as Kepler-1649 c, scientists will continue inching their way toward a more complete understanding of the distribution (or lack thereof) of life in the cosmos.

The new findings were published April 1 in The Astrophysical Journal Letters.

There’s still a lot that astronomers don’t know about the planet, including what its atmosphere is like and whether violent flares from its red dwarf host render the planet uninhabitable. Nevertheless, the find strengthens the case that Earth-like planets might not be as rare as early, observationally biased exoplanetary searches seemed to suggest.

“This intriguing, distant world gives us even greater hope that a second Earth lies among the stars, waiting to be found,” said Thomas Zurbuchen, associate administrator of NASA’s Science Mission Directorate in Washington, in a press release.

An illustration of what Kepler-1649c could look like from its surface. (Credit: NASA/Ames Research Center/Daniel Rutter)

A Second Look at Kepler Data

In late 2018, as Kepler ran dangerously low on fuel, NASA decided to retire the space telescope, bringing an end to its nearly decade-old hunt for replica Earths. But even though the telescope has finished searching the cosmos, researchers have continued to comb through the mission’s archived data, looking for overlooked planets.

When scientists search for evidence of exoplanets within Kepler data, they look for tiny drops in the brightnesses of distant stars. This is called the transit method, and, so far, astronomers (usually employing algorithms that autonomously scan the data) have used the method to discover more than 2,000 confirmed exoplanets (plus some 2,500 more promising candidates) in Kepler data. Some of these observed dips in starlight are obvious signs of an exoplanet, like those from a close-in hot Jupiter transiting a star. But other signals are more ambiguous, like when a small Earth-sized planet in a relatively wide orbit passes in front of its host star, blocking just the tiniest portion of the star’s light. However, the algorithm that astronomers often use to analyze Kepler data was known for missing a fair number of planets. This is partly because a transiting planet isn’t the only thing that can cause the brightness of a star to dip. For instance, orbiting clumps of dust can lead to exoplanet-like signals, thought they don’t typically cause the well-defined dips seen in planetary transits. The algorithms often write off such ambiguous signals as “false positives.” But this means some real planets can sometimes fall through the cracks.

So, for this study, the researchers opted to double-check previously disregarded Kepler signals in search of overlooked exoplanets. And that’s how they found out that Kepler-1649 c was mislabeled as an error, which set back the discovery for the better part of a decade.

“It’s incredible to me that we just found it now, seven years after data collection stopped on the original Kepler field,” said Jeff Coughlin, a SETI Institute scientist and co-author of the paper.

“The more data we get, the more signs we see pointing to the notion that potentially habitable and Earth-size exoplanets are common around these kinds of stars,” said Andrew Vanderburg, a researcher at the University of Texas at Austin and another of the paper’s co-authors.

“With red dwarfs almost everywhere around our galaxy, and these small, potentially habitable and rocky planets around them,” Vanderburg said, “the chance one of them isn't too different than our Earth looks a bit brighter.”

Editor's Note: A correction was made as the planet is 106 percent the diameter of Earth, not 6 percent as previously printed.