When comets pass close to the Sun, gravitational forces can rip them to pieces. One of those pieces probably hit Earth 66 million years ago, say astrophysicists. 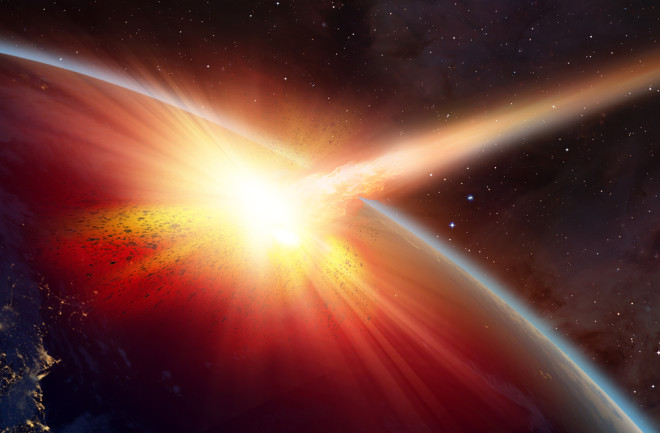 This artist's illustration highlights the tremendous amount of energy released when an asteroid strikes a planet. (Credit: muratart/Shutterstock)

Some 66 million years ago, Earth was hit by a giant object from space leading to one of its greatest catastrophes. The impact devastated the planet and wiped out around three quarters of plant and animal life, including the dinosaurs.

Today, all that is left of this impact are the faint remains of a giant crater that sits beneath the Yukatan Peninsula in the Gulf of Mexico. So weathered is the Chicxulub crater that it was not discovered until the late 1970s. The impact also left behind a thin layer of chromium-rich dust which suggested the impactor must have been a carbonaceous chondrite rock type.

Since then, researchers have studied this event with intense interest to better understand what caused it. However, this is still something of a mystery.

Now Amir Siraj and Abraham Loeb at Harvard University in Cambridge, Massachusetts, have calculated that the impact must have been caused by a fragment of comet that had flown too close to the Sun where powerful gravitational forces had ripped it apart. One of these fragments later slammed into the Earth.

Their conclusion finally explains the origin of the impact after an earlier theory — that an asteroid was to blame — was shown to be unlikely.

First, some background. The Earth has been bombarded with giant rocks throughout its 4.5 billion-year history, particularly early in its life as it plowed through the debris left over from the formation of the solar system. Since then, big impacts have become much less common because the biggest rocks have largely been mopped up.

Siraj and Loeb point out that meteorites of the required composition and size are so rare that they would be expected to hit Earth once every 3.5 billion years, too rare to be responsible for the Chicxulub event.

However, our part of the solar system still gets bombarded when asteroids and comets further away collide and break up. This sends the fragments hurling toward the inner solar system where they can wreak havoc.

In 2007, astronomers suggested that just such a collision some 160 million years ago was responsible for sending the Chicxulub impactor our way, with the fragments taking tens of millions of years to reach us. The culprit, they said, was a group of asteroids called the Baptistina family, which orbit largely between Mars and Jupiter.

But spectrographic surveys of this asteroid family later suggested its chemical make up did not have the correct chromium signature. Then further investigations suggested the fragmentation must have occurred much later, perhaps 80 million years ago, leaving too little time for the debris to reach Earth. That left the asteroid theory in tatters.

Now Siraj and Loeb say they have identified another culprit — long period comets. These strange icy objects spend most of their lives in the outer solar system, approaching the Sun only rarely. So at first sight, they seem unlikely to be responsible.

But Siraj and Loeb point at that the only sample-return mission to a comet — a 1999-2006 mission called Stardust — found that its target was made of carbonaceous chondrite, exactly the right stuff to explain the Chicxulub impact.

Now they have studied the way these comets break up as they approach the Sun. Since comets are often only loosely bound piles of rock and ice, the Sun’s gravitational forces can rip them apart. This dramatically increases the number of fragments in Earth’s vicinity and the rate they would hit. “This new rate would be consistent with the age of the Chicxulub impact crater, thereby providing a satisfactory explanation for the origin of the impactor,” say the researchers.

It also explains why Earth has been hit by other smaller objects of similar composition since then. The largest crater to appear on Earth in the last million years is the Zhamanshin crater in Kazakhstan, and this was also formed by a carbonaceous chondrite, just as Siraj and Loeb’s theory suggests.

That’s interesting work that aims to lay to rest one of the great mysteries of Earth’s past. It’s also a reason to keep our eyes peeled for other fragments out there. A comet fragment just a few kilometers wide would devastate Earth. It wouldn’t be the first time … or the last.

Ref: Breakup of a Long-Period Comet as the Origin of the Dinosaur Extinction: arxiv.org/abs/2102.06785