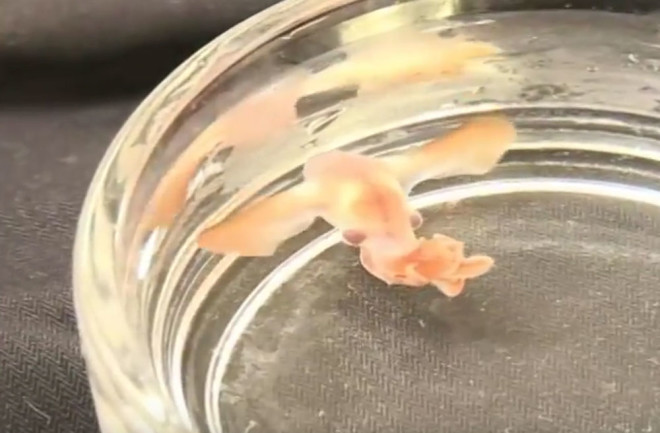 See this little guy? He's just emerged into the world, but the appropriately-named Dumbo octopus is already taking his first flaps. Resemblance to a certain flying elephant notwithstanding, Dumbo octopuses actually live far below the ocean's surface.

They're some of the deepest-living octopuses, and are so rare that this is the first hatchling that was caught on camera. The "ears" are actually fins that help them to swan about the seafloor.

They belong to a sub-order of octopuses known as cirrate octopuses. Like most of their brethren, they possess two fins atop their head (though Grimpoteuthis certainly goes above and beyond in this regard), have an umbrella-like ring that stretches between their arms as well as a small internal shell.

The discovery happened in 2005, during a dive by the Deep Atlantic Stepping Stones expedition in the northwest Atlantic Ocean, when researchers happened to gather a bit of coral with some odd-looking lumps on it. Those lumps actually turned out to be eggs of a species of octopus known as Grimpoteuthis, and the researchers brought the eggs back with them to the surface, where one soon hatched in a petri dish.

The researchers detailed their findings in a paper published Monday in Current Biology.

The eight-limbed Dumbo appears to be a perfect miniature of adult Grimpoteuthis, indicating that the octopuses hatch as fully-formed juveniles, though they're a bit smaller than the adults. This ability likely gives them a developmental head start and decreases their chances of being eaten by predators.

When they're born, Dumbo octopuses are already prepared to fly away — no magical feather required. Female Grimpoteuthis will usually lay their eggs in protected spaces on the seafloor and leave them there to await what fate may come.

This is in contrast to female incirrate octopuses, which hover protectively over their eggs until they hatch and then die. But as Dumbo makes clear, these baby cephalopods need little in the way of help.