An Active Orangutan Burns Fewer Calories Than a Lazy Human 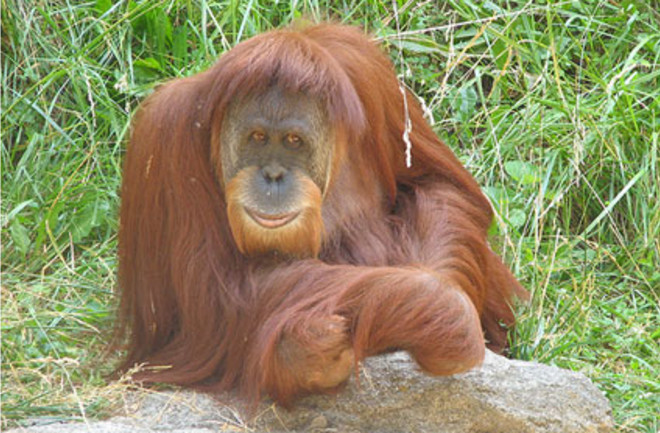 When an orangutan swings through the trees like an acrobat in its rainforest habitat, it's burning fewer calories than a human couch potato. A new study by biological anthropologist Herman Pontzer has found that oragutans use less energy, pound-for-pound, than any other mammal--except for that all-time champion of metabolic lethargy, the tree sloth.

"You and I sitting in front of our computers use more energy each day than these orangutans that are walking around, and climbing around and socializing around their big enclosures," Pontzer says. [NPR]

; the cooperative animals drank water that contained heavy isotopes of hydrogen and oxygen, and peed in cups for analysis. The researchers then checked the ratio of hydrogen to oxygen isotopes--the oxygen levels reflected how much CO2 the primate had breathed out during physical exertion, and allowed researchers to determine how many calories the orangutan burned. The results

, published in the Proceedings of the National Academy of Sciences, showed that a 250-pound male orangutan consumed 2,000 calories a day, which is 20 percent less than a typical human male. The two 120-pound females burned 1,600 calories a day.

Dr. Pontzer said the orangutans may have evolved this parsimonious metabolism to avoid starving when the ripe fruits that they eat periodically become scarce in their native rainforests. The evolutionary tradeoff is that orangutans grow slowly and reproduce at a low rate. [The New York Times]

For more on this story, see Ed Yong's post

80beats: Orangutans Are Threatened With Extinction as Habitat Shrinks