In 1952, a plague of frogs struck a small Wisconsin town. Then the tide turned against Lithobates pipiens. 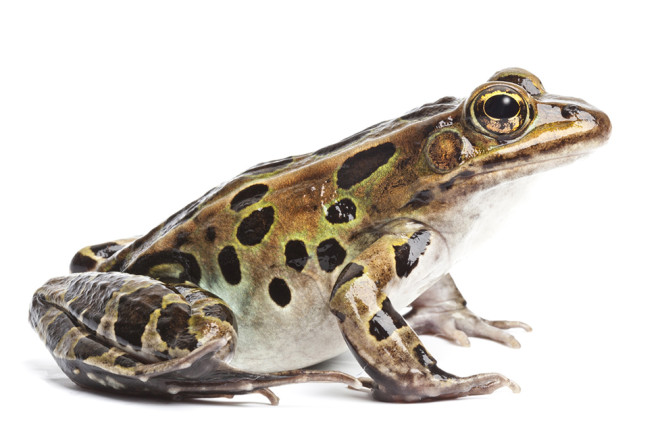 The handsome leopard frog was once common in the U.S. | Chris Mattison/Naturepl.com

One spring six decades ago, in the ponds and marshes along a western arm of Lake Michigan, about 25 miles north of the city of Green Bay, Wis., the northern leopard frog Lithobates pipiens was busy breeding. The males trumpeted sex calls that vaguely sounded like, “ ’ere I am,” followed by croaks of “rah-rah-rah” when they sensed females nearby. The females responded with their own throaty grunts.

The outcome of this noisy annual ritual was a lot — an awful lot — of fertilized eggs attached to plants or afloat in the waters of the marshes. During a normal breeding season, the lake would recede and the water would dry up or grow shallow, allowing only about 1 percent of the spawn to survive and mature. A different scenario played out in 1952. The water of Green Bay, which normally floods in the spring, remained at a high level into the summer, and the wind kept whipping water into the adjoining marshes and ponds. Bayside roads crumbled from wetness, and shoreline homes became uninhabitable. But amphibians laid their eggs as usual.

As a result, conditions were fantastic for frog eggs: About three times the normal number of eggs hatched and released tadpoles that grew into frogs. And these young northern leopard frogs were hungry, too hungry for the wetlands to support in such numbers. In search of grasshoppers, crickets, mosquitoes, snails or anything resembling sustenance, the frogs — 175 million strong — left the marshes and hopped toward Oconto, a quiet nearby county seat that was home to about 5,000 people. Once the frogs arrived en masse, they outnumbered the people 35,000 to 1.

Invasion of the Leopard Frogs

Thus began a nightmarish ordeal in which the most common amphibian in the region became way, way too common. Sleepy little Oconto resembled the set of one of the horror films for which the 1950s were so well known. Frogs filled the streets of the former lumber town, encircled homes and set the air throbbing with their massed croaking. Eli Waldron, a native of the area writing for The New Yorker, described loud and chilling rustlings in the grass, car trips marked by the resonant explosions of amphibians being squashed under the tires, lawn mowers that blew out sprays of severed frog parts, high mounds of frogs dotting the landscape, dogs driven wild and the terror of one resident who pointed a flashlight out his window at night to illuminate “a million shining little eyes. … It made the hair bristle on the back of his neck.”

For more than a week, Oconto was a town overrun. Frogs were the main topic of conversation and the main obstacles underfoot. People survived by joking about having frogs’ legs for dinner and ways to make money off the unexpected amphibious assault.

Gradually, though, as the summer wore on, the leopard frogs retreated, and peace came back to the people of Oconto. In the outlying ponds and marshes, however, frogs still ruled in massive numbers and made deafeningly cacophonous music as predatory herons, gulls and crows grew fat.

The handsome leopard frog was once common in the U.S. | Chris Mattison/Naturepl.com

This was not the first time an overabundance of wildlife had beleaguered local residents. In 1893, the

reported on an infestation of pine snakes in nearby Oconto Falls that forced residents to catch and slaughter the reptiles in large numbers. Such a population boom, known to ecologists as overshoot, occurs when a sudden rise in a species’s numbers exceeds the environment’s capacity to support the increase. It can happen in temporarily optimal conditions in which disease or predators vanish, food is bountiful or breeding becomes spectacularly successful. It can appear among all sorts of creatures, from microorganisms to vertebrates.

But among instances of overshoot, the Oconto frog invasion hit the nearby humans especially hard. From their perspective, it appeared to rival the biblical plague that helped persuade the Egyptians to free the Israelites, and it may still rank as the most dramatic population spike of frogs in our nation’s history. (A smaller-scale eruption of about 1 million eastern spadefoot toads occurred at Shol Pond in Florida’s Ocala National Forest in 2000.)

Even so, nobody in 1952 should have been surprised to see abundant northern leopard frogs in Wisconsin or anywhere in much of the rest of the northern and western United States. At that time, the species abounded. Hunters who harvested the frog to sell always found plenty to fill their crates. Compared with other common frogs, people often found the northern leopard frogs handsome, intelligent-looking and even “aristocratic.” Their slender and long-legged green- or brown-spotted bodies were long familiar not only outdoors, but also on the dissection tables of high school science labs around the country.

During the 1970s and ’80s, though, it wasn’t dissection but the loss of habitat, disease and pollution that combined to greatly reduce the number of northern leopard frogs throughout their range. They are now endangered or threatened in many regions of North America.

“Today, if we find a site with 30 breeding females, that’s healthy,” says Lea Randall, a population ecologist and biologist who leads a northern leopard frog study program for the Center for Conservation Research at the Calgary Zoo. In contrast, she estimates that 50,000 breeding females would have been needed to produce the army of young frogs that descended upon Oconto. “And it would have taken two or three years of steady water levels to produce those numbers,” Randall says.

In some areas of the U.S. and Canada, the population of northern leopard frogs is no longer in free-fall decline. “They still can be locally abundant, and they’re still fairly common in Wisconsin,” Randall says. “But it’s unlikely that a population explosion of the kind that took place in Oconto could ever happen again. The base populations are just so much smaller than they used to be, despite all the work done to try to re-establish populations. The most of these frogs that I’ve ever seen at one site is 800.”

The 1952 plague intrigues her, though. “I’d be interested in its effect on the surrounding ecosystem. I’ve read that there were not many mosquitoes around Oconto that year. I’d love to find out the effects on the frog’s predators — on birds, coyotes and fish,” she says. The ironies of a dramatic population spike within a frog species now considered threatened do not escape her. “It’s sobering to consider that a species once so numerous can now be faced with extinction. Any species that we take for granted can go extinct if we don’t try to conserve it.”

Not many people in Oconto can remember the great frog invasion, but street and place designations like Frog Pond Road and Frog Lake remain to jog the memories of old-timers. No matter how stupefying and unnerving the recurrence of such an event would be to many, it would be a good sign that a once-mighty amphibian — and a familiar old friend of the people of North America — is again on the march. Or the hop.