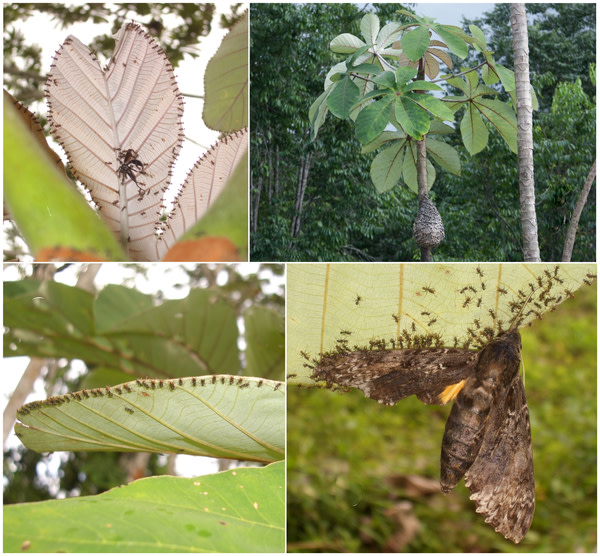 In the Brazilian rainforest, a grasshopper lands on a leaf and seals its fate. It was after a quick meal, but this leaf belongs to the Cecropia obtusa plant and it employs hidden bodyguards – ants. Underneath its leaves, thousands of Azteca andreae ants lie in ambush, poised at the edges with their jaws outstretched. As soon as the grasshopper lands, the ants rush out from their hiding places, seize it by the legs and pull it spread-eagled. The leaf turns into a medieval torture rack, with the ambushers holding the victim while their nestmates bite, sting and dismember it. This hunting strategy is all the more amazing when you consider that the ants weigh just over a milligram each while their prey – including grasshoppers and moths – can weigh up to 10 grams. Ants are famously strong and they obviously hunt in large numbers, but even so, holding down a struggling insect that outweighs them by around 10,000 times can’t be easy. It’s the equivalent of a team of humans holding down three struggling blue whales. But the ants and their host plant work together. The claws of the ants hook into the velvety, downy underside of C.obtusa’s leaves in the same way that Velcro fastens using miniature hooks and loops. The plant provides biological hitching posts that its bodyguards can anchor themselves to and the ants are far stronger on their host plant than on any other.

The incredible tactics of the Azteca ants were discovered 16 years ago, but the secret behind their prodigious grip has only just been revealed by a team of French and Spanish scientists led by Alain Dejean. They watched the entire hunting sequence by luring large moths to the leaves using ultraviolet light, or by dropping grasshoppers onto them. At the slightest touch, the closest workers attacked the prey and drove it towards others lying in wait, which collectively flipped it underneath the leaf and stretched it out. 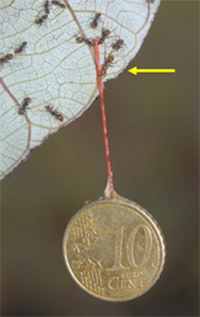 To test the workers’ strength, Dejean dangled threads with weights at the end of them in front of their open jaws. He found that each worker can hold onto 8 grams, around 5,700 times her own weight. As a unit, they can manage far more. The workers also seemed to be particularly strong on the downy underside of the leaves than on the rough upper surface, or on a sheet of smooth plastic. And they were especially mighty on their host plant. When Dejean tested them on a closely related tree with a less downy underside they couldn’t hold onto as much weight. The downy underside is the key – it provides something for the ants’ claws to fasten onto. These ants are one of the many hundreds of ant species that form lasting relationships with plants, defending them from plant-eaters in exchange for shelter and food. But all of them have a problem. Plant nectar is typically poor in proteins and nitrogen, and while some plants pay their bodyguards with special protein-rich food packages, most plant-defending ants must get these nutrients in other ways. Some rely on thriftiness, by producing workers with very thin shells and venoms that don’t contain any protein. Some rely on bacteria and others farm sap-sucking bugs that they gently nip from time to time. And yet others solve the problem by hunting for fresh meat. Foraging in the forest canopy is difficult so these tree-top predators rely on ambush techniques that make the most of prey that approaches them. Azteca andreae’s strategy of lying in wait is just one such technique. A related species Azteca bequaerti hides in special hollows produced by their host where it listens for the vibrations of a landing insect and swarms it en masse. Even more elaborately, Allomerus decemarticulatus creates elaborate traps by building layers over tree branches that look like parts of the tree but are actually hiding places for ant ambushers. The layers are made out of the hairs of its host tree bound together with a fungus that the ants farm. They are pitted with tiny holes that the ants hide in. When a victim lands, the ants launch a grisly surprise attack, rushing out from their holes and grabbing the victim by the legs. As with A.andreae, the victims of A.decemarticulatus are stretched out and eaten. In the rainforest, even a harmless looking leaf or branch can hide a painful death inside or beneath it. Reference: PLoS ONE http://dx.doi.org/10.1371/journal.pone.0011331More on ants: