The new find is the first ammonite, a marine animal, preserved in amber ever found. 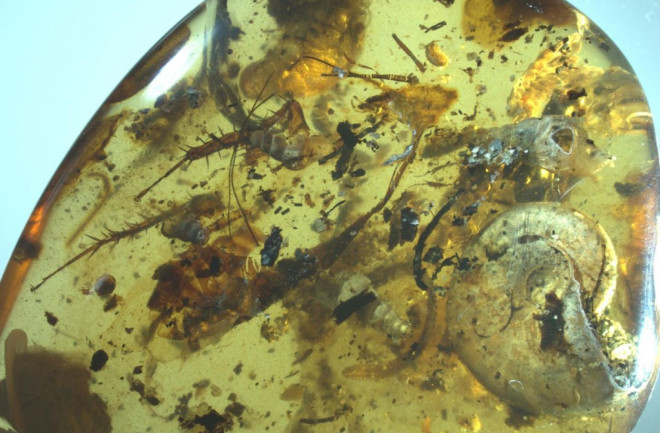 Amber from Myanmar preserves a rare snapshot of coastal life 99 million years ago, including a marine mollusk called an ammonite (at right). (Credit: NIGPAS)

Amber, being fossilized tree resin, usually preserves scenes from an ancient forest. The latest stunning find from Myanmar, however, is a souvenir from a day at the beach 99 million years ago, including the first ammonite, a marine animal, preserved in amber.

The piece of amber is small — about the size of a standard pair of dice, and less than a quarter of an ounce — but it's jam-packed with animals that tell an intriguing story about its journey from tree trunk to fossil bed. The researchers used X-ray microcomputed tomography to create high-resolution images of the goodies inside the amber. They identified at least 40 individual organisms, including mites, spiders, millipedes, beetles, wasps, flies and cockroaches. They also found the shells of four marine gastropods, a common kind of mollusk.

The crown jewel of the find, however, is an ammonite preserved so well that the team was able to identify that it was a juvenile member of the genus Puzosia. Like the gastropods, only the shell of the ammonite was preserved, without any soft tissue, which indicates that the marine animals were dead before their remains were trapped by the tree resin.

Burmese amber, mined in the north of Myanmar and generally dating to the middle of the Cretaceous, has offered up an incredible array of paleontological finds over the past few decades, particularly in the last couple years. Macrofossil finds, such as a feathered dinosaur tail, baby snake (the first in the entire fossil record), ticks on a dinosaur feather and the earliest rainforest-dwelling frogs, may get the most attention, but the greatest scientific value of amber is that it can provide a snapshot of an entire lost ecosystem.

This latest spectacular discovery provides slices of multiple ecosystems. That's because the animals preserved in the pocket-sized treasure come from terrestrial, intertidal and potentially freshwater habitats. (The amber preserved four isopods, crustaceans that may live in a variety of environments. One of the preserved specimens appears to belong to a genus found in both marine and freshwater habitats).

The team believes this eco-mashup occurred because a forest was growing along a coast, probably next to a beach and possibly at or near a river estuary. One working hypothesis: As the resin oozed down a branch, it collected various terrestrial organisms. Then it plopped onto the beach and covered the already-dead marine animals. A less likely but still possible alternate scenario: An extreme tidal event, such as a storm surge or tsunami, may have flooded the forest, bringing marine debris inland.

Either way, what's particularly extraordinary is that this little blob of amber survived being pummeled by waves, eventually getting covered by sediment, to be rediscovered nearly 100 million years later. The study appears today in Proceedings of the National Academy of Sciences.