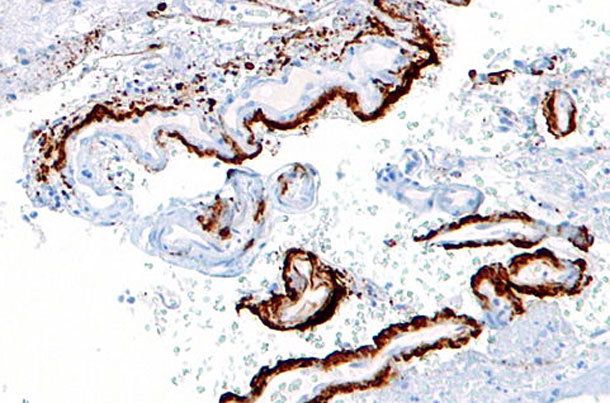 Prions are villains worthy of any comic book. They are infectious misshapen proteins that can convert their normal peers into their own twisted images with a touch. As their numbers grow, they gather in large groups and destroy brain tissue. They cause diseases such as mad cow disease, Creutzfeld-Jacob disease (CJD) and scrapie. And they’re not alone. It seems that many brain diseases are also caused by clusters of misfolded proteins that can seed fresh groups of themselves. The list includes Alzheimer’s, Parkinson’s and Lou Gehrig’s diseases. None of these are infectious – the proteins behind them can’t spread from one individual to another, but there is mounting evidence that they can trigger waves of corrupted shapes within a single brain. I wrote about the latest such evidence in Alzheimer’s disease for The Scientist. Here’s a taster. Head over there for more.

In 1982, Nobel prize-winner Stanley Prusiner first discovered prions—misfolded proteins that act as infectious agents, spreading the disease within and among individuals. Two years later, he speculated that Alzheimer’s disease might involve a similar spread of malformed proteins, at least within patients. Recent experiments have supported his idea. [The hallmarks of Alzheimer’s] include tangled clumps of amyloid-beta, a peptide (protein fragment) that aggregates in large plaques. Lary Walker from Emory University and Mathias Jucker from the University of Tübingen managed to trigger the spread of amyloid-beta plaques in the brains of mice by injecting them with brain extractsalready containing clumps of the peptide. But these extracts always contained other proteins that could have been responsible for the spread of the plaques. Now, Prusiner, along with Jan Stohr and Joel Watts from University of California, San Francisco, have shown that pure amyloid-beta can achieve the same effect on its own.