Along the edge of the Ecumene 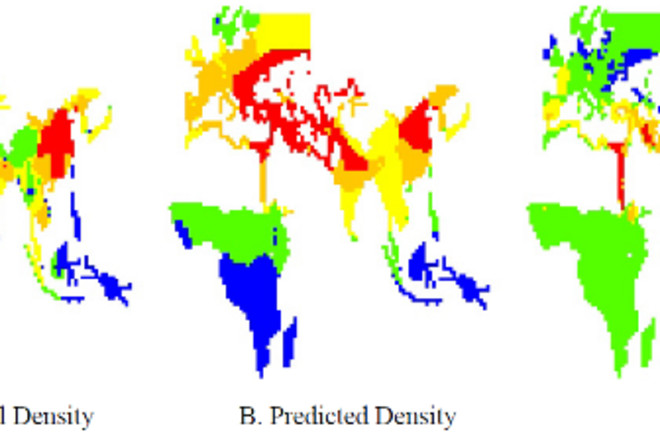 A few weeks ago, Peter Turchin, who runs the excellent Social Evolution Forum, published a paper in PNAS, War, space, and the evolution of Old World complex societies. It is open access, so you can read it yourself. And Turchin himself has respondedto questionsat length. You might also check out my reviewsof two of his books, as well as my interview with him. From all that

it should be clear that broadly speaking I am enthusiastic about Turchin's project, Cliodynamics.

Historical details matter, but Turchin's aim is to establish a broad brush framework of the coarse dynamics which shape the scaffold for specific aspects of historical process. Without this background all we have are cluttered details. The big top line finding is that 2/3 of the variation in the emergence of large scale states between 1500 BCE and 1500 CE can be explained by a model with 12 parameters, of which only 4 have large effects. The largest proportion of the variation is explained by the diffusion of military technology from the steppe in to the civilized world. As Turchin notes the beauty of this result is that a rather coarse data set and simple formal model has strong generality. The questions being explored have to do with the overall dynamics of civilizational rise, and fall, rather than specific historical events. But anyone with a cursory knowledge of world history sees the intuitive plausibility of the result. Much of history before the modern era has consisted of an almost dialectical synthesis between the steppe periphery and the agricultural lands beyond the limes of civilization. More generally high mobility populations which maintain martial competence due to at least some nomadic element to their lifestyle, in contrast to high density sedentary stratified societies dependent upon grain agriculture, have always loomed on the margins, only to become central players in subsequent epochs. It is not an if, but when. Turchin's model suggests that agriculture is necessary, but not sufficient, for civilization as we understand it. In particular, the complex institutions which allow for circles of trust, organization, and control, and allow for scalability in political units, can only be understood by conflict and competition driven by the friction between societies. Agriculture likely immediately gave rise to warlike tribal confederations. But Turchin's results suggest that inter-group competition forged by pressures from highly organized and effective mobile military societies from the steppe added an extra impulse, which brought together proto-statelets (obviously the horse was a major catalyst here, as it increased the effectiveness of mobile nomads in relation to the farmers). In antiquity some societies had even formalized this tension in a nearly mythological sense; consider the dichotomy between "Iran and Turan" in ancient Persia. Cliodynamics offers the hope of a robust interpretative framework for historical analysis. There is already a fair amount of comparative work, but it is too verbal and ad hoc to defend itself against sophisticated deconstructions and critiques. And when exploring particular issues in regional history it is often important to understand whether they are sui generis, or an inevitable part of the broader tapestry (e.g., the Chinese pattern of steppe influenced polities being central in dynastic development does not seem so peculiar or exceptional in this framework).