Africa is Splitting in Two, Creating Dozens of Volcanoes

The process of rifting in Africa means that the continent is slowly breaking apart and with that comes lots of volcanoes, some with the potential for massive explosive eruptions. 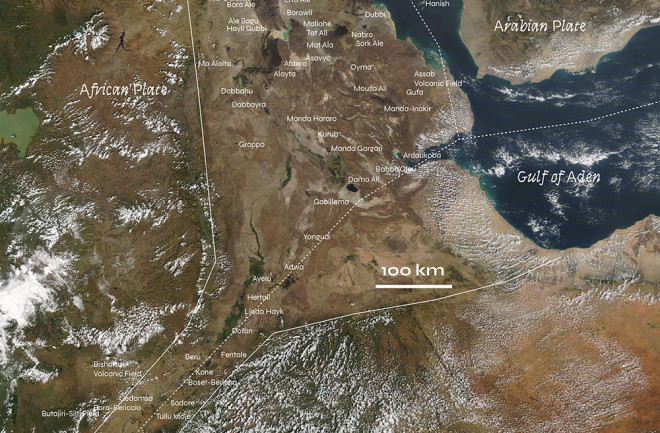 A view of the East African Rift in Ethiopia and Eritrea, taken by the Terra MODIS imager on November 8, 2019. NASA.

The modern geography of Earth is created by the plate tectonic engine that runs in our planet. What we see as familiar maps today would have looked very different 50 million, 500 million, 3 billion years ago. That's because the continents shift over time at rates of centimeters per year.

This might not seem like much, but over geologic time, that means they can collide and separate multiple times. At some points in Earth's history, we had supercontinents, when all the landmasses were one. Today, we're almost at the opposite end of the spectrum, with many continents far apart.

Currently, we only have one location where a continent is busy splitting itself apart, and that's the East African Rift. This part of the African continent extends to the southwest from Eritrea and represents one part of a three-armed rift system. The other two parts have separated to the point where new ocean crust has formed, creating the Red Sea and the Gulf of Aden. This is the boundary between the African and Arabian plates.

However, the third arm has not produced any new ocean, at least not yet. Instead, we have a valley that extends into the heart of Africa where the continent is spreading apart. This spreading likely started some 25 to 30 million years ago. With the spreading comes volcanism ... and a lot of it. There are only a few places on Earth with as many volcanoes as the East African Rift in Ethiopia and Eritrea.

The East African Rift from Space

The Terra MODIS image above shows just how extensive that volcanism is. Volcanoes start in the Red Sea itself, with islands like Zukur and Hanish. The tiny dot off the coast of Yemen is Jebal Al-Tair, a volcanic island that last erupted in 2007, with lava flows reaching the sea.

Once you head inland, you run into the beast of Erta'Ale, with its active lava lake at the summit. The volcano is almost 60 miles (100 kilometers) from end to end. Lots of smaller cones on its slopes, like Bora Ale and Gada Ale, have produced most of the lava flows. Ale Bagu, on the other hand, is a basaltic volcano with a much more explosive history.

The summit lava lake at Erta'Ale, seen in 2012. Wikimedia Commons.

Just off the shores of the Red Sea is Dubbi, a large stratovolcano that, in 1861, sent lava flows more than a dozen miles (22km) down its slopes, produced 19 craters at the summit and rained ash 180 miles (300km) from the volcano. To the south at the border with Djibouti, Manda-Inakir formed a new cinder cone during eruptions in 1928-'29.

The dark ash plume from Nabro can be spotted just to the east (right) of Erta'Ale. In 2011, Nabro produced an eruption that unleashed lava flows and a large ash and gas plume. Even with its remote location, the eruption killed seven people and may have played a role in slight atmospheric cooling the following year. Nabro is a bimodal volcano that erupts hot and runny basalt as well as sticky rhyolite, so this eruption was much more passive than previous ones at this large caldera volcano.

The dark smudge below Erta'Ale is Alayta, another basaltic volcano. It last erupted in 1915 and its 1907 eruption sent a large lava flow down its slopes. Yet, right next to Alatya is Afderà, a rhyolite volcano that sits on the nexus of three faults. This is another example of the bimodal character of the East African Rift -- a lot of close volcanoes erupting low silica basalt or high-silica rhyolite and not a lot in between. In 2005, there was an ash-rich eruption from Dabbahu, south of Erta'Ale that caused 6,000 people to be evacuated.

Near the bottom of the image, Alutu sits between two lakes and has over 300,000 people living within less than 20 miles (30km) of the volcano. It has a history of explosive eruptions of rhyolite and obsidian flows. The most recent was only about 2,000 years ago. This is joined by Tullu Moje, another rhyolitic volcano to the north of Alutu, that erupted as recently as 1900.

A 2001 image from the International Space Station of the O'a caldera in Ethiopia. The dark blue caldera lake is the caldera formed by a massive eruption 240,000 years ago. NASA.

Two calderas lurk to the very south of the East African Rift in Ethiopia. The O'a and Corbetti calderas are both rhyolite volcanoes with very large explosive eruptions in their past. They are also some of the most potentially hazardous volcanoes on the planet, with over 450,000 and 1.1 million people living with a couple dozen miles of each of them, respectively. Neither are known to have erupted in historical times, but both are potentially active volcanoes.

This isn't even all the volcanism of the East African Rift. Volcanoes like Ol Doinyo Lengai, Kilimanjaro and Nyiragongo lie to the south of this shot.

The process of splitting a continent -- or even just trying to -- can be incredibly geologically active. The shear number of volcanoes in the East African Rift show just how powerful it can be.