All the Last Gorilla in India Wants Is a Date 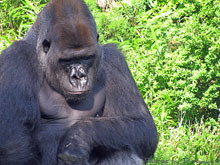 You know those nice guys who just can’t seem to find a special someone?Meet Polo, a 36-year-old male who’s been unattached for the past eight years, ever since his mate died in 2000.Originally from Dublin, Ireland, he now lives in southern India—in a zoo.Polo is the only gorilla left in all of India. (Although in Spain, he’d practically be considered human, for legal purposes.)

Zookeepers say Polo is healthy, friendly, and bilingual (he understands both English and the local Kannada language), but extremely lonely.“The few joys he enjoys are bathing and searching for food that his keeper hides in blocks of ice or in bamboo to keep him energized,” says Vijay Ranjan Singh, the director of the zoo.Polo is a western lowland gorilla, an endangered species found in central Africa.In the wild, a handsome silverback like Polo would be leading a troop of up to 30 gorillas, most of them female.

Fearing for Polo’s psychological well-being, zookeepers are putting out a desperate call for potential mates or companions.They say they’ve already contacted all the major zoos in the world, but no one seems willing to part with their gorillas.Too bad Craigslist personals doesn’t have a category for ape seeking ape—though this comes close.