All puffed out: do pufferfish hold their breath while inflated? 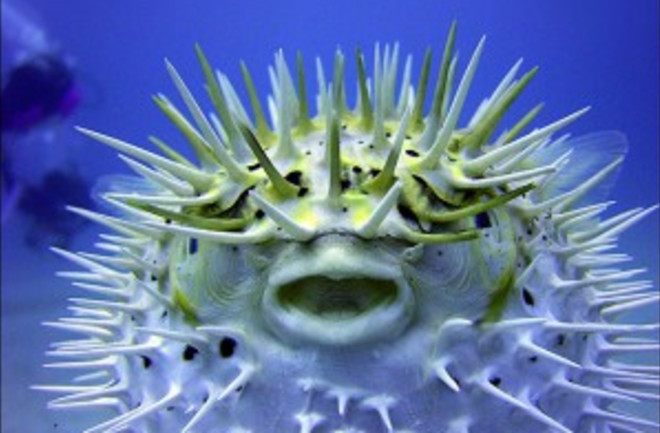 Today we get to discuss.... pufferfish! When they're startled, these cute little buddies can inflate their stomachs with water to an extent that even Takeru Kobayashi would envy. To achieve this feat, pufferfish "inhale" the water through their gills. And up to now, it's been assumed that while inflated, pufferfish then "hold their breath" (meaning stop using their gills) and instead absorb oxygen through their skin. However, these scientists have collected data showing that at least one species of pufferfish is actually incapable of breathing through its skin--nevertheless, it absorbs a large amount of oxygen while inflated, suggesting its gills are still functioning. Eat your heart out, Kobayashi!

All puffed out: do pufferfish hold their breath while inflated? "The inflation response of pufferfishes is one of the most iconic predator defence strategies in nature. Current dogma suggests that pufferfish inflation represents a breath-holding response,whereby gill oxygen uptake ceases for the duration of inflation and cutaneous respiration increases to compensate. Here, we show that the black-saddled pufferfish (Canthigaster valentini) has an excellent capacity for oxygen uptake while inflated, with uptake rates increasing to five-times that of resting levels. Moreover, we show that this species has negligible capacity for cutaneous respiration, concluding that the gills are the primary site of oxygen uptake while inflated. Despite this, post-deflation recovery of aerobic metabolism took an average of 5.6 h, suggesting a contribution of anaerobic metabolism during pre-inflation activity and during the act of ingesting water to achieve inflation." Related content: NCBI ROFL: A foot needs a nipple like a fish needs a bicycle. NCBI ROFL: Intense dead fish smell proven no excuse for not working. NCBI ROFL: How the hell does one end up as a doggy breath odor judge?