Do we tread among a host of alternative life-forms—a shadow biosphere that parallels life as we know it? 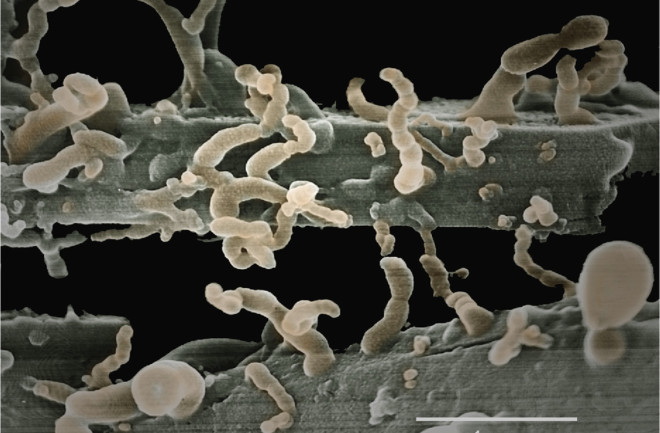 Nanobe filaments could be the smallest organisms on Earth. Scientists speculate that some may use unusual building blocks. | Philippa Uwins/University of Queensland

If you could take a cell from any organism—an alga, giant sequoia, condor, or your second cousin—and dive through its membrane into its clear liquid cytoplasm interior, you would find that all life as we know it shares the same building blocks. Familiar amino acids and proteins initiate and accelerate the same chemical reactions in precisely the same ways, regardless of the organism. And all known life uses liquid water as a foundation.

It is for these reasons that biologists believe that you, me, the flea, and the bonobo all descended from a single common ancestor: a microbe that lived some 3.5 billion to 3.8 billion years ago and (luckily for us) reproduced, eventually evolving into all of the living things we see, and don’t see, around us. Biologists call that ancestor, somewhat prosaically, the last universal common ancestor, or LUCA.

But what if, in the nearly 4.6 billion years of Earth’s history, there was a second genesis? What if there was a moment when a certain collection of molecules gave rise to another living organism, independent of the building blocks we’re familiar with and unrelated to LUCA? The notion is more than science fiction.

Researchers working in the new field of synthetic biology can imagine other building blocks: different proteins, amino acids (the core components of proteins), and metabolic systems that would work just as well as, or perhaps even better than, the ones we know. Suppose this other living organism, the one unrelated to LUCA, reproduced, endured, and has been living beside us all along. It would be alien life on Earth, a sort of life scientists call “weird.”

Such life could be weird in any number of ways. It might have as its basis a molecule other than DNA, for example, or it might use a foundation, or solvent, like ammonia or liquid methane instead of water.

In 2010 astrobiologists thought they had uncovered weird life when they discovered a bacterium in California’s Mono Lake that they suspected used arsenic instead of phosphorus to build DNA and proteins. Although these findings are now discredited, the search for alternative life-forms on Earth continues.

Arsenic-based life was just one of the possibilities explored by scientists in a pioneering article in 2009. “Signatures of a Shadow Biosphere,” published in Astrobiology, discussed the prospect of alien life carrying on among us. Its six authors represent a rather unusual collection of expertise. Four of the six have a background in the life sciences. Two of them—the two who have worked perhaps the hardest to bring the article’s ideas to a wider audience—are cut from a rather different disciplinary cloth. Paul Davies trained as a mathematical physicist, and as recently as the 1990s his main work was in cosmology and quantum physics. Carol Cleland is a member of NASA’s Astrobiology Institute and a professor of philosophy at the University of Colorado Boulder.

It was Cleland, along with microbiologist Shelley Copley, who coined the term “shadow biosphere,” a provocative and slightly unsettling reference to a hypothetical biosphere, or host of weird life, that may or may not intersect our own. According to Davies, Cleland, and their colleagues, there are at least three ways weird life might have managed, and might manage still, to evolve and even thrive on Earth.

Chile's Atacama Desert could be home to unconventional microbes that have adapted to an extreme environment. | Thinkstock

One way weird life could have endured is by moving into places that even extremophiles (creatures that live in intensely harsh environments) tend to avoid. There are several habitats once thought to be inhospitable to even the world’s most adaptable organisms—places like the core of Chile’s Atacama Desert, the driest region on Earth; ice sheet plateaus in Greenland that are 10,000 feet thick; and near hydrothermal vents on the ocean floor with temperatures above 750 degrees Fahrenheit, to name a few.

Molecular biologist Mitch Sogin, at the Marine Biological Laboratory at Woods Hole, Massachusetts, called the diversity of most microbial communities “staggering” but had this to add: Those communities generally consist of an enormous number of species, with relatively few individuals each. In line with that model, weird life could be present and unaccounted for in many microbial communities, keeping its profile low and, since it is weird, consuming what no one else wants and excreting what no one else is bothered by, going entirely unnoticed as a result.

Finally, there is the possibility—this perhaps the strangest of all—of weird microbes and familiar microbes operating in symbiotic relationships that benefit each other through the exchange of chemical compounds, enzymes, or even genes. Symbiotic relationships in the microbial realm are not uncommon. History has demonstrated that, contrary to the idea of living things being fiercely competitive, there is as much cooperation as competition, and perhaps a good deal more of the former, among microbes.

Consider the strange case of mitochondria, the structures inside a cell that perform respiration and generate chemical energy. It is thought that some 3 billion years ago they were independent, oxygen-respiring bacterial nomads, finding comfort and sustenance where they could, and otherwise making do in a harsh world. Then, one or several of them found refuge in the warm, wet, pH-balanced interior of a cell and took up permanent residence.

Others followed; achieving survival more by snuggle than struggle, host and guest eventually negotiated terms. The cell provided the bacteria protection, and the bacteria supplied the cell with oxygen-derived energy and disposed of its waste. The arrangement ultimately developed into a codependency so complete that today, the cells in your body would die without the mitochondria inside them.

The Alien Next Door

If weird microbes exist, it is not out of the question that they have established similar arrangements with familiar microbes. They would make up a biosphere biochemically integrated with our own. If weird life in the Atacama Desert is the person you’ll never meet, and weird life living among life as we know it is that utterly silent and all-but-invisible tenant, then biochemically integrated weird life is the roommate who shares your toothbrush and “borrows” a twenty from your wallet, but at regular intervals thoughtfully leaves a bouquet of flowers and a bottle of wine on the kitchen table.

For decades astrobiologists have imagined finding life on other worlds. The prospect excites them for two reasons. First, with two examples of life—one familiar and one alien—scientists could compare differences and commonalities. They would know, for instance, whether all life requires a long molecule like DNA, and whether it needs cells and a liquid medium. They could begin to discover universal laws of biology, much as physicists since Newton have discovered universal laws of physics. As a science, biology would have fully matured.

Second, and more profound, the discovery of such life would imply that life is universal and can arise anywhere conditions are right. Such a discovery, in space or in our own backyard, would ripple into all realms of human experience, altering forever our understanding of our place in the universe.

Adapted from Weird Life: The Search for Life That Is Very, Very Different From Our Own by David Toomey. Copyright 2013 by David Toomey. With the permission of the publisher, W.W. Norton & Company, Inc.