Getting older is not a recipe for crotchetiness. Although those two cranky Muppets will always be up in their balcony, Americans in general don't become less happy with age. If anything, they get happier.

The trajectory of people's happiness over a lifetime is tricky to study, because in a given year you're capturing not only your subject's age but also the current events. You need to follow a large group of people over many years, and you need them to be all different ages when the study starts.

Angelina Sutin and her colleagues at the National Institute of Aging in Maryland had just such a dataset to work with. Called the Baltimore Longitudinal Study of Aging (BLSA), this project has been running for more than five decades and has gathered data on people born everywhere between 1885 and 1980. These subjects have answered questions about their happiness on many occasions—some as many as 19 times—throughout their lives.

Want to find your own happiness score? Answer the following questions on a scale from 0 to 3, where 0 is "rarely or never" and 3 is "most or all of the time." In the past week of your life, how frequent were these feelings?

I felt I was just as good as other people

I felt hopeful about the future

Summing the four numbers will give you your well-being score. If you were in the BLSA, that score would be your data point for today.

When the researchers put all 2,267 subjects together and looked at how their happiness changed with age, they got a decidedly downward slope. A frowny face, if you will. 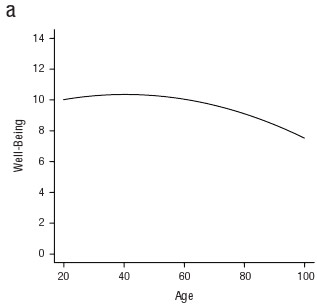 It looked like aging made people less happy. But then the researchers tried a different tactic. Instead of lumping all their subjects together, they grouped them by when they were born. That frown turned upside down:

Within each birth year, the results now looked like a somewhat more optimistic "meh?" face. Every group's well-being slightly (but significantly) improved with age.

The first set of results had sloped downward because people who were born earlier reached lower endpoints of well-being. In the graph, you can see that someone born in 1905 or 1925 is likely to reach a 9 or a 10 later in life; someone born in the 1960s might make it nearly to 12 (a perfect score).

Sutin thinks this could have to do with the biggest national frowny-face of all: the Great Depression. People who lived through this time, she writes, may have felt lasting psychological effects. Although their well-being still improved as they aged, the cloud of the Depression may have lingered.

(Sutin notes also that younger and older adults, according to previous studies, treat this set of well-being questions and the 0-to-3 scale similarly. This suggests the results aren't just happiness inflation—say, younger people reporting a 12 for the same feelings that older people would rate a 10.)

Aside from increasing economic prosperity in the United States, there are plenty of other reasons people may have felt happier in more recent decades. Sutin cites increased life expectancy, decreased infant mortality, better nutrition, less disease, and more women in the workplace as possible factors. The twentieth century also saw faster travel, the invention of the Internet, and the eradication in America of both the polio virus and gelatin-based entrées. There's a lot to be happy about.

Now that Sutin has found that the average American seems to have an upward trajectory of well-being, she's interested in people's individual paths: what makes one person's happiness increase more or less (or decrease) over time?

In this study, subjects who were white had higher well-being scores on average, as did those with more education. Sutin hopes to pick apart the social, economic, and health factors that affect how happiness changes with age. When everyone can feel as :) as they want, we'll really be living in the future.