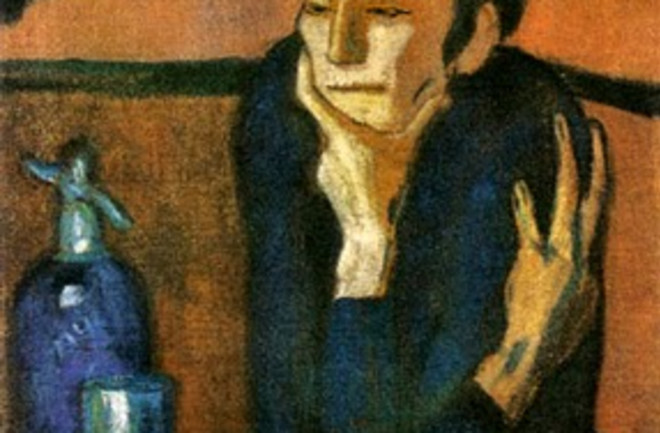 Absinthe is a spirit. It’s very strong, and very green. But is it something more?

I used to think so, until I came across this paper taking a skeptical look at the history and science of the drink, Padosch et al’s Absinthism a fictitious 19th century syndrome with present impact

Absinthe is prepared by crushing and dissolving the herb wormwood in unflavoured neutral alcohol and then distilling the result; other herbs and spices are added later for taste and colour.

It became extremely popular in the late 19th century, especially in France, but it developed a reputation as a dangerous and hallucinogenic drug. Overuse was said to cause insanity, “absinthism”, much worse than regular alcoholism. Eventually, absinthe was banned in the USA and most but not all European countries.

Much of the concern over absinthe came from animal experiments. Wormwood oil was found to cause hyperactivity and seizures in cats and rodents, whereas normal alcohol just made them drunk. But, Padosch et al explain, the relevance of these experiments to drinkers is unclear, because they involved high doses of pure wormwood extract, whereas absinthe is much more dilute. The fact that authors at the time used the word absinthe to refer to both the drink and the pure extract added to the confusion.

It’s now known that wormwood, or at least some varieties of it, contains thujone, which can indeed cause seizures, and death, due to being a GABA antagonist. Until a few years ago it was thought that old-style absinthe might have contained up to 260 mg of thujone per litre, a substantial dose.

But that was based on the assumption that all of the thujone in the wormwood ended up in the drink prepared from it. Chemical analysis of actual absinthe has repeatedly found that it contains no more than about 6 mg/L thujone. The alcohol in absinthe would kill you long before you drank enough to get any other effects. As the saying goes, “the dose makes the poison”, something that is easily forgotten.

As Padosch et al point out, it’s possible that there are other undiscovered psychoactive compounds in absinthe, or that long-term exposure to low doses of thujone does cause “absinthism”. But there is no evidence for that so far. Rather, they say, absinthism was just chronic alcoholism, and absinthe was no more or less dangerous than any other spirit.

I’m not sure why, but drinks seem to attract more than their fair share of urban myths. Amongst many others I’ve heard that the flakes of gold in Goldschläger cause cuts which let alcohol into your blood faster; Aftershock crystallizes in your stomach, so if you drink water the morning afterwards, you get drunk again; and that the little worm you get at the bottom of some tequilas apparently contains especially concentrated alcohol, or hallucinogens, or even cocaine maybe.

Slightly more serious is the theory that drinking different kinds of drinks instead of sticking to just one gets you drunk faster, or gives you a worse hangover, or something, especially if you do it in a certain order. Almost everyone I know believes this, although in my drinking experience it’s not true, but I’m not sure that it’s completely bogus, as I have heard somewhat plausible explanations i.e. drinking spirits alongside beer leads to a concentration of alcohol in your stomach that’s optimal for absorption into the bloodstream… maybe.

Link: Not specifically related to this but The Poison Review is an excellent blog I’ve recently discovered all about poisons, toxins, drugs, and such fun stuff.