About That Dinosaur Family Tree Rewrite... 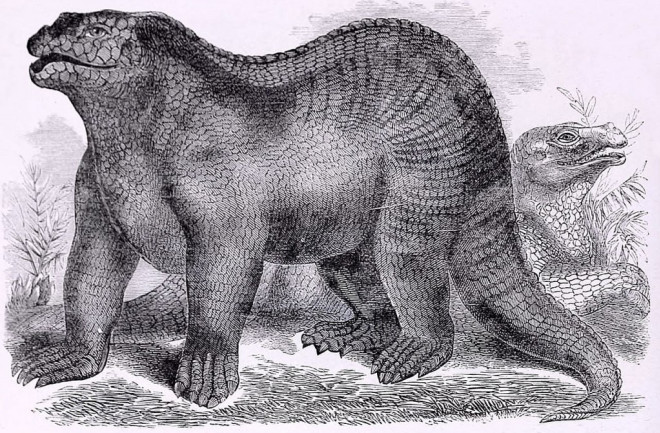 A proposed dinosaur family tree rewrite may sound like a crazy idea, but remember, not that long ago scientists thought Iguanodon looked like this (hint: we know better now). (Credit Samuel Griswold Goodrich/Illustrated Natural History of the Animal Kingdom, 1859) Earlier this year, a trio of paleontologists led the charge to rewrite the most fundamental thing we believe about dinosaurs. Their call to action generated controversy and, more importantly, serious academic discussion. Now, a bevy of researchers weigh in on whether the dinosaur family tree really does need a revision — and their answer likely will surprise many armchair dino enthusiasts. You may remember back in March when University of Cambridge paleontologist Matt Baron and colleagues published a proposal to scrap the way we've organized the dinosaur family tree for more than a century. Before Baron and company came along, any serious dinosaur enthusiast over the age of 5 would tell you that the animals have always been divided into two groups: ornithischians and saurischians. Ornithischians included the rhino-like dinos, ranging from the armored ankylosaurs to the horned and frilled ceratopsians, as well as bipedal animals like the duck-billed hadrosaurs. The ornithischians were a vegan bunch — both their ischium and pubis pelvic bones pointed backwards, creating more room in the gut area to process all that vegetation. Ruminate on that for a while. Saurischians, on the other hand, included bipedal carnivores known as theropods as well as the increasingly supersized sauropodomorphs, such as titanosaurs and Brontosaurus. The pubis bone of the saurischians pointed forward — there are other differences between the two groups, but the pelvic bone orientation is the most obvious trait. In the paper published in Nature back in March, the maverick paleontologists proposed a reshuffle of the different dino types, grouping the theropods with the ornithischians in Ornithoscelida, and leaving the sauropodomorphs in Saurischia along with herrerasauridae, a very early, primitive dinosaur type that has never quite fit anywhere.

On the left, the classic dinosaur family tree. On the right, Baron et al's proposed revision. (Credit Nature) In August, supporting their proposed dinosaur family tree reshuffle, Baron and colleague Paul Barrett published a second look at Chilesaurus diegosuarezi, which had been described in 2015 as an unusual herbivorous theropod. Instead, said Baron and colleagues, Chilesaurus was actually an early form of ornithischian. Keeping It All In The Family (Tree) As you might imagine, not everyone jumped on board with the dinosaur family tree do-over. But unlike other dinosaur debates where people get all apoplectic if research pokes holes in a hypothesis they have embraced as incontrovertible fact (I'm looking at you, pro-feathered tyrannosaur tantrum-throwers), paleontologists took a serious look at whether a reorganization of the dinosaur family tree might indeed be needed. Published today in Nature, a consortium of early dinosaur evolution experts are by turns complimentary and cautious about the revision proposed by Baron and colleagues. Applauding the sheer scale of the team's dataset, the consortium nonetheless faulted its reliance on previously published material rather than in-person inspection of many of the fossils. These kinds of massive data-crunching studies are based on assigning values to often very subtle aspects of the fossils, so it's possible, say the rebuttal's authors, to miss something. Tweaking the dataset based on their own observation and running the numbers again, today's team did not find slam-dunk support for Baron and colleagues' proposed revision. But they also note that the current, traditional dinosaur family tree is only "weakly supported" by the data. Reminding everyone of another proposed revision from the 1980s — sticking all the herbivores together in Phytodinosauria and leaving the meat-eaters on their own — today's team admitted the last word has not been written about the dinosaur family tree. Recent fossil finds have complicated what we know with certainty about the animals' evolution story, and perhaps a revision is in order. The question is exactly how the dinos should be divvied up, says the consortium, and the answer is still unknown.

This isn't paleontology's first time to the revision rodeo. In addition to the traditional dinosaur family tree (pink) and the recent proposed revision (blue), the field has previously toyed with a third version (green). (Credit Max Langer) The second big claim in Baron et al's March paper suggested that dinosaurs, traditionally believed to have evolved in the Southern Hemisphere, actually may have evolved in the north. Today's rebuttal noted that the consortium's reanalysis did not support this idea and instead pointed strongly to a southern start for the animals. Baron and colleagues, in a reply published with the rebuttal, disagreed with some of the tweaks to their dataset but seemed to share the general sentiment of the consortium, which noted the proposed revision, and challenges to it, are a good thing for reinvigorating the study of dinosaur origins. It's nice to see the scientific method in action.