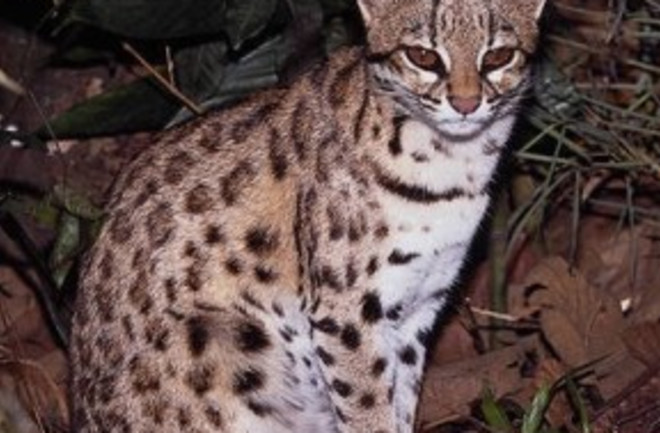 The Brazilian tigrina looks a lot like a housecat. Image credit: yvetteSoler/Flickr The tigrina is a housecat-sized wild cat that roams through two different regions of Brazil: the northeast corner and the south. But DNA sequencing has shown that these two separate tigrina populations are actually two entirely different species. A team of Brazilian researchers analyzed the cats' genomes and found no evidence of inbreeding between the more numerous southern tigrinas and the sparse tigrina population in the northeast. The scientists are now categorizing the southern population as its own species, called Leopardus guttulus.

A Coat of a Different Color

The new species of cat has darker coloration and larger spots, or "rosettes," than the northern L. tigrinus. The researchers suggest this is because the two kinds of cats have adapted to blend in to their disparate Brazilian habitats. The northern cats, with their lighter-colored coats, live in open areas with dryer, savannah shrub lands and forests, whereas the darker southern cats live in denser and wetter Atlantic forests. The team identified the new species in the midst of studying the genetic swapping between tigrinas and two other South American species of leopard. They found that the northern L. tigrinus has continued to hybridize with other cats, such as the L. colocolo, while the southern L. guttulus population has not.

A researcher on the team told told National Geographic:

“So much is still unknown about the natural world, even in groups that are supposed to be well-characterized, such as cats. In fact, there are many basic aspects that we still don’t know about wild cats, from their precise geographic distribution and their diets.”

The researchers contend, in their paper published today in Current Biology, that figuring out how these species are related is important for basic evolutionary knowledge as well as conservation efforts. Poaching laws and land preservation are often determined based on the status of individual species, so recognizing the northern and southern trigrina species as distinct will allow scientists to assess and protect them separately.