A Whale of a Tail: Humpback Morse Code and a Phytoplankton Bloom Visible from Space 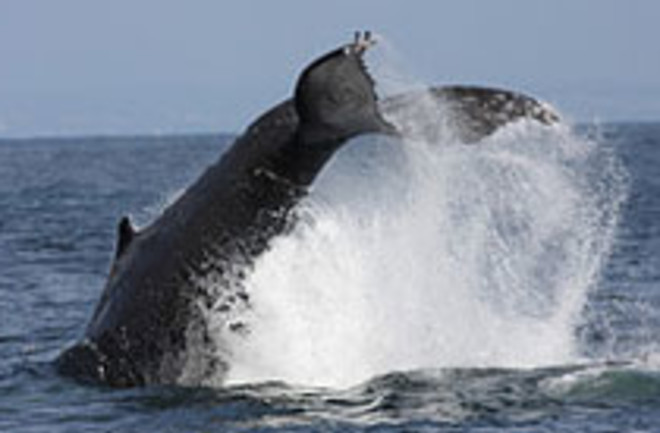 While I was on a whale-watching trip out of Akureyri, Iceland in late June, a humpback whale approached our boat and began vigorously slapping its tail and pectoral fins on the water. The humpback was breathtakingly close to us, and the dramatic behavior lasted for more than five minutes.

Check it out in the video I shot above. (Please accept my apologies for the distracting wind noise — I was not equipped at the time with an external mic and windscreen.)

This may look like the whale is saying, “Get the hell out of here!” But research suggests this common behavior is a form of close-range communication with other whales. More about that in a minute.

But first, what’s a story ostensibly about marine biology doing in a blog dedicated to remote sensing and the science of our planet?

It turns out that in this case, there’s a clear connection between whales, satellite imagery, and earth science. Let me explain…

The beautiful turquoise swirls you see in the satellite image above consist of phytoplankton blooming in the North Atlantic waters right off Iceland. The warmth of spring and summer naturally triggers these blooms of microscopic plant-like organisms.

And guess what likes to gobble huge quantities of phytoplankton, along with small schooling fish that also depend on these organisms?

In fact, these school-bus-sized creatures eat up 3,000 pounds of food per day during summer, which is when they lay on thick reserves of blubber. The whales then enter a period of fasting to focus on long migrations south and mating. They rely on the blubber to get them through.

Like land plants, phytoplankton use photosynthesis to harness the energy of sunlight. They do this in order to transform simple inorganic compounds — carbon dioxide and water — into the organic material of their bodies. That makes them “primary producers” at the very bottom of the oceanic food chain.

Phytoplankton are eaten by microscopic zooplankton, small fish and invertebrates, which in turn are eaten by bigger creatures. Although they are very large, humpback whales are also able to dine directly on phytoplankton. Thanks to the evolutionary innovation of baleen, they do it by filtering the microscopic organisms out of seawater.

Which brings me back to the whales and the phytoplankton bloom in Icelandic waters. As springtime brings longer days and sunnier skies, conditions become increasingly favorable for phytoplankton. At a certain point, their numbers explode so much that they become visible to satellites in space.

This more detailed view of the Icelandic phytoplankton bloom was acquired on July 7 by the Operational Land Imager (OLI) on the Landsat 8 satellite. (Source: NASA Earth Observatory)

We didn’t notice signs of a big phytoplankton bloom from our whale watching boat out of Akureyri, Iceland. But that doesn’t mean copious quantities of the organisms weren’t present.

Eyjafjörður, the fjord in which our boat travelled, was filled with humpbacks. Ordinarily the boat has to motor out for about a half hour before the first humpback is seen. But there were so many in the fjord that evening that we spotted one immediately after leaving the dock. We went on to see many more that evening.

I can tell you one thing: They definitely weren’t there to say hello to us. But with the tail and fin slapping behavior I shot on video, the whale may well have been saying hi to his or her buds.

As I mentioned at the outset, that behavior may look aggressive. But a research team led by Ailbhe Kavanagh of the University of Queensland in Gatton, Australia, suggests the whale is just trying to communicate to nearby animals.

That communicative purpose was strongly suggested by one of Kavanagh’s research findings: Repetitive tail and pectoral-fin slapping suddenly increases just before new whales get together into a small group, or an existing group splits up.

Humpbacks do communicate by “singing.” But the research also showed that when it is windy, fin-slapping increases. So does breaching — whales hurling themselves out of the water and crashing back down. One possible reason: In windy conditions, singing might be less audible, prompting whales to switch to their own form of Morse code.

I can add anecdotal support to these findings: The evening we went whale watching, it was pretty windy. And when the whale we watched began slapping his tail and fins, other whales did indeed migrate toward it.

Was the whale trying to say, “Hey guys, lots of yummy phytoplankton over here?” Or perhaps, “Check out these weird creatures pointing at us with those strange objects?”

Your guess is as good as mine!

But in this case, the meaning is quite clear: “Bye bye.”