A Toxic Relationship: Pufferfish Moms Poison Their Young (In A Good Way)

Life as a fish larva is tough. Your odds of survival are slim to none. First off, you can't swim all that well, so you're mostly-drifting around in the ocean hoping that, when it's time for you to settle down, you find yourself somewhere suitable. You're also really, really small — the perfect morsel for tons of other species, from jellies to krill and even other fish. And your parents? They just abandoned you, sent you and your hundreds of siblings into the harsh real world without giving you anything to help you survive. Unless you're a larval pufferfish, that is. Your mom and dad may not win any parenting awards, but they didn't leave you with absolutely nothing. Your mom did something that would make other reef fish larvae incredibly jealous, and that just might save your life: she gave you poison. Pufferfishes in the genus Takifugu are known for their poisonous nature. Any predator that messes with these toxic fish learns the hard way that their tissues are loaded with tetrodotoxin, one of the most deadly poisons on the planet. It can kill a wide diversity of species, from fish to mammals, because it's a potent paralytic that shuts down ion channels vital for nerve functioning. Humans are not immune: tetrodotoxin killed 179 people and poisoned another 467 in Japan alone from 1974 to 1983, where the flesh of these fish, fugu, is considered a delicacy perhaps because of the danger involved. The LD5o of tetrodotoxin is only 8 micrograms per kilogram of body weight, making it 120,000 times as deadly as cocaine, 40,000 times as deadly as meth, and more than 50 million times as deadly as the active component in marijuana, THC. It's more deadly than black mamba venom, VX nerve gas, or cyanide. A few milligrams is enough to kill a full-grown man, and Takifugu species not only have more than that in their tissues, they can secrete that much if provoked. Not surprisingly, few things care to eat pufferfishes. Not that the puffers take any chances. It takes some time for the animals to accumulate their potent toxins, and smaller ones have less poison to impart upon a potential predator in general, so they have a bit more to fear. But luckily, puffers have another trick up their sleeves: as their name implies, they puff. They can suck down water and swell to several times their normal size, making their attackers realize they've bitten off more than they can swallow, quite literally. It takes a lot of energy and is quite stressful for a pufferfish to puff, but it's effective. 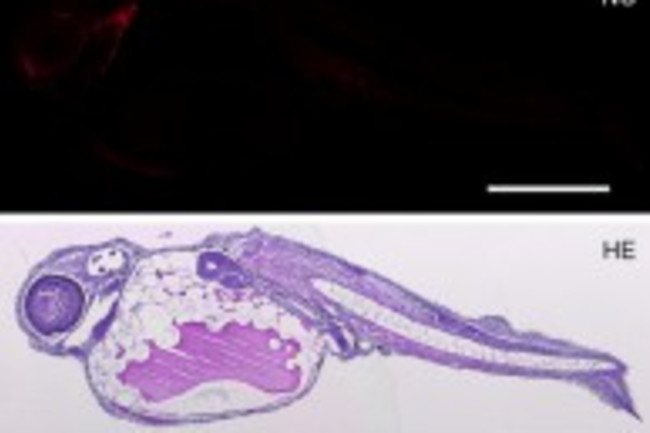 Small amounts of tetrodotoxin on the surface of a larval puffer, in red (top, marked with small yellow arrows). Figure 2 from Itoi et al. 2014 Which leaves the poor puffer larvae in a bit of a bind, as they are too young to have accumulated their own toxins, and too small to balloon. Alone and helpless, they would make an easy meal for any small fish. But they don't need to make their own toxins — yet. Mom makes sure they have some to go to keep them safe for the long journey ahead. In a paper published in the journal Toxicon, scientists from the Department of Marine Science and Resources at Nihon University in Japan showed that larval pufferfish are armed with tetrodotoxin. But unlike their parents and other adult fish, which have higher toxin concentrations internally because they get their poison from their diet, the larvae's poison is concentrated on their body surface — a goodbye gift from mom. The team found that eggs contained roughly 1.604 ng of tetrodotoxin while larvae had anywhere from 0.015–0.107 ng in their tissues. That's not a lot, and likely not quite enough to kill hungry little fish that might otherwise find puffer larvae to be a tasty meal. What the scientists really wanted to know was whether this little bit of poison is effective enough to keep the larvae safe, so the team performed feeding trials to see if several common predators would gobble them up. The predators did, of course, as predators do, but then they spat the baby puffers out, showing the toxin was sufficient to protect the young fish. 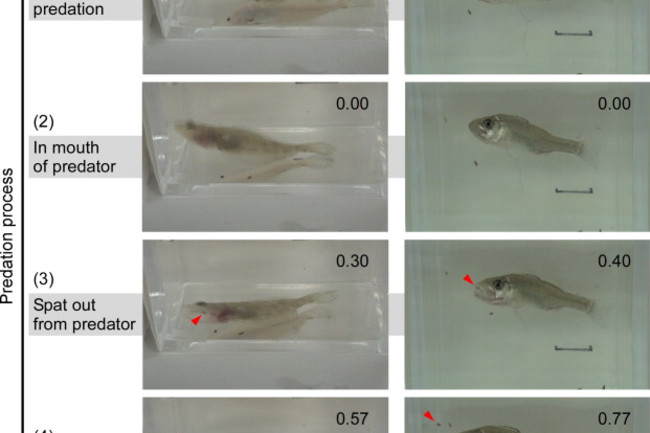 Larval puffers being spat out by two potential predators. Mom's tetrodotoxin saves the day! Figure 1 from Itoi et al. 2014 Previous studies had noticed that pufferfish have particularly high levels of tetrodotoxin in their ovaries, and this new study sheds light on why. The female puffers store tetrodotoxin to be released with their eggs, which sticks around on the skin of the larvae that hatch. Though the puffer parents don't do much for their kids, they do send them off with just enough poison to give them a fighting chance. Citation: