The copepod’s coping method amid rising temperatures and ocean acidity would have consequences for the broader food chain. 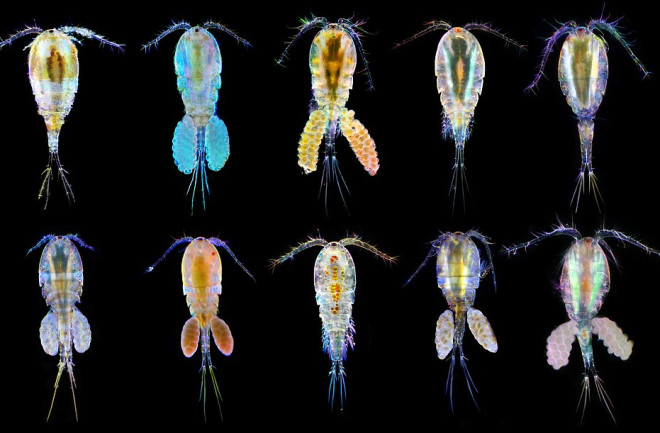 There are around 11,500 known species of copepods. (Andrei Savitsky/Wikimedia Commons)

A recent study shows that the tiny copepod crustacean is the ocean’s equivalent of a canary in a coal mine. New research demonstrates that these “cows of the sea” may be able to evolve to adapt to climate change — but it could come at the cost of their resiliency, a recent Nature Communications study suggests. Most importantly, any changes in their health send ripples across the food chain.

How the Copepod Copes

When simulating future climate change conditions in a lab, namely higher temperatures and oceanic concentrations of carbon dioxide, scientists found that the zooplankton can adapt to warmer and more acidic water. That's because the individuals who couldn’t tolerate the higher temperatures and levels of acidification died out. After a few generations, the better-equipped survivors were able to reproduce at normal rates.

But this left them less able to survive other stressors, such as a shortage in the phytoplankton they eat. The copepods reproduce every 20 days, giving researchers the chance to observe how nearly two dozen generations adapted to climate change. At first their reproduction levels slipped a bit, but they were back on track after a few generations, says study co-author Melissa Pespeni, a biologist at the University of Vermont. But when the 21st generation was placed in cooler waters, their reproduction levels plummeted.

“They’re losing a lot. They’re spending their genetic currency, as you will, as they adapt at the expense of being able to tolerate something else that the environment throws at them next,” she says. “Yes, there’s adaptive capacity, but there are hidden costs.”

The noble copepods, along with all life on Earth, have faced a particularly challenging decade: The past eight years have been the warmest on record since record-keeping began in 1880, reports NASA’s Earth Observatory. Earth’s temperature in 2021 tied 2018 as the sixth-warmest year on record, according to an analysis from NASA and the National Oceanic and Atmospheric Administration (NOAA). If, after a hot year, the following year dropped in temperature, the copepod population could face negative consequences, says Reid Brennan,  a lead co-author on the copepod study and a marine evolutionary biologist at Germany’s GEOMAR Helmholtz Centre for Ocean Research.

Copepods occupy an important spot at the base of the food chain: They eat algae and are consumed by fish, including salmon, tuna and cod. In addition to oceans, they also live in nearly every sea and freshwater habitat.

Since the climate change conditions in the lab replicated real-life settings, Pespeni says, losing their genetic flexibility means they’re more susceptible to population crashes. These would impact the entire food chain, she says. Larger creatures, like fish and lobsters, she says, are able to move away from warmer waters, but tiny copepods (which run as long as 2 millimeters) can’t.

Pespeni and her team studied an herbivorous species of copepods, a population that grows with algal blooms. The jellyfish and larger fish then eat them, linking the plants and their nutrients, essentially, to the fish. “So, if you drop out in the middle of this food web, then you’re missing a vital connection between the base and the higher-level consumers,” Brennan says. “If we have a reduction in zooplankton, then we have a reduction in fish; that has implications for the food we eat, for general ecosystem functioning in the oceans, for carbon fixation in the oceans and so on.”

The scientists focused on a copepod species called Acartia tonsa, though fish also eat other copepod species, along with other types of zooplankton. Different species of copepods have varying tolerances for salinity levels, temperatures, and hypoxia, or a reduction in the ocean's oxygen levels, Brennan says. So there is hope that if some copepod species’ populations plummet, others might be able to survive. Various zooplankton have different nutrient compositions, and fish do better or worse depending on the type of zooplankton they’re eating, he says.

Another scientist involved in the study, Hans Dam, a biological oceanographer at the University of Connecticut, says he was surprised by the speed with which the species transformed. “They adapt very quickly and get to the point where they can’t get any better, but they don’t get back to where they were before being hit with those stressors,” he says. “It means there’s no free lunch with climate change. There’s always a price to pay.”

So, if we could somehow slow climate change and the warming waters and ocean acidification returned to normal parameters, he says, populations that have evolved genetically to adapt to climate change may not be able to do so again — just as those in the experiment failed to thrive when returned to cooler, less acidic water.

Species have historically evolved and adapted to changing conditions, but those changes have typically taken place more gradually than in the past several decades. Ultimately, the climate is warming so rapidly that nature can’t keep up, Dam cautions. “This idea that nature takes care of things is true; it has happened in the past. Things do adapt," he says. "The problem is the process has been over many, many millions of year: What took millions of years to happen is now happening in not even a century — nature cannot adapt that quickly.”