The symptomatology of the Medo pit viper's bite hadn't been recorded by science until herpetologist Gerry Martin grabbed one by the tail. He plans to include details from the frightening experience in an upcoming paper about the species. 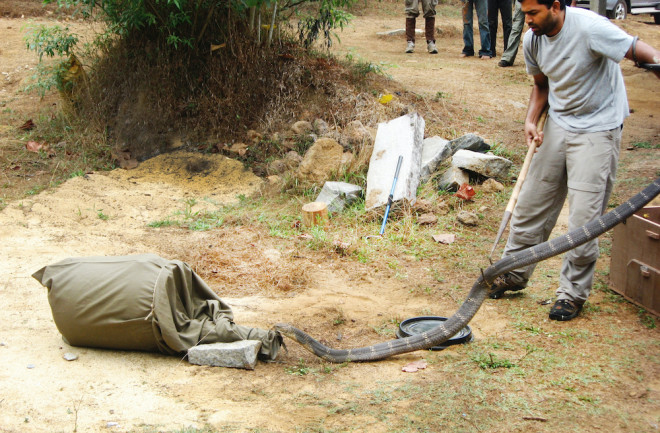 Gerry Martin is no stranger to snake wrangling; here, he captures a king cobra in Karnataka, India. (Credit: Gerry Martin)

This article appeared in Discover’s annual state of science issue as “Once Bitten.” Support our science journalism by becoming a subscriber.

Gerry Martin is one of India’s most well-known herpetologists. In 2011, he traveled to a remote area in Arunachal Pradesh, considered India’s wildest frontier, to collect venom. During a nighttime outing, he came across a small, lime-green snake called Trimeresurus medoensis, commonly known as the Medo pit viper. The snake can be found in hilly areas of China, India and Myanmar. But key traits, like population size and venom toxicity, remain little understood. Martin grabbed the snake by the tail for collection, and quickly learned more than he ever hoped to know.

While I was readying the collection bag, the viper bit my pinky. My colleague made a sling out of his jacket and we walked over a kilometer back to the village. The finger began throbbing and swelling; it was excruciating. Because of the rain and the bad roads, we were stuck in a bamboo longhouse a day’s drive from a hospital. And we didn’t know much about this viper’s venom. But most species from its group are not fatal. We kept checking my pulse and doing blood-clotting tests. My finger looked like a plum. When the swelling pressure increased, a little more of the skin would tear open — those were the most painful parts.

A villager came in and said the same kind of snake had bitten his brother’s finger a while ago. When I asked what happened to his finger, he said nonchalantly, “After a couple of weeks, he broke it off.”

The Medo pit viper is still little understood by scientists. When Martin was bitten, his finger swelled “like a plum." (Credit: Gerry Martin)

The next day, my colleague used the village’s only phone to learn what medication I should take. Someone drove four hours to get it. Once my blood started clotting, we decided it was fine to wait. It was still raining and the road had caved in so we couldn’t go anywhere anyways. It took five days for the road to be repaired. When the rain paused, I was taken to a hospital. I had resigned myself to losing the finger. But when I came to after the anesthesia, I still had it.

Before then, the symptomatology of this species’ bite had not been recorded by science; we are currently working on a paper about the Medo pit viper that will include this information. On a personal level, I learned about the dark side of India’s snakebite epidemic. [India has around 58,000 snakebite deaths annually.] There are places where primary health centers have no idea what they’re doing. They don’t know how to properly treat bites or have the proper equipment. That’s one thing all of us got to see. — As told to Brent Crane