A small favor turns into a fortuitous discovery. 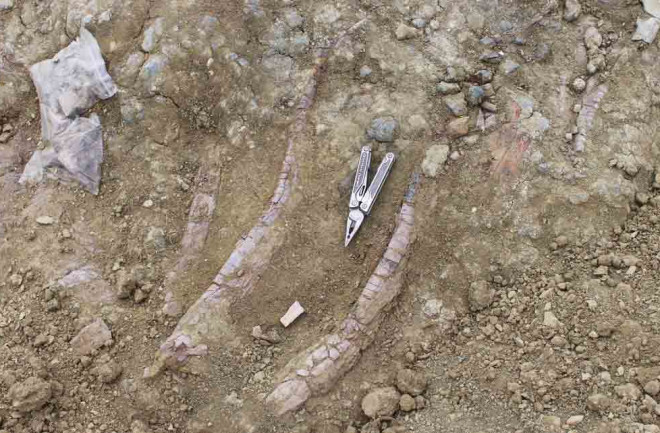 These bones were visible from the ground when Schein's team pulled back a blue tarp at the dig site. | Brittany Malinowski

Sign up for our email newsletter for the latest science news
When he was working on the Bighorn project, another team asked Schein to cover up this exposed blue tarp to avoid drawing attention to the abandoned dig site. As they were checking out the site, Schein and his crew were surprised to see dinosaur bone fragments just sitting on the surface. | Brittany Malinowski

Nearly every kid goes through a dinosaur phase — paleontologists just never grow out of it. Jason Schein is the New Jersey State Museum’s assistant curator of natural history. At 37, Schein has a list of notable achievements. He helped excavate what’s thought to be the largest titanosaur — the last long-necked, plant-eating sauropod dinosaur group — discovered in southern Patagonia. He also helped unite two fossil fragments from the same prehistoric sea turtle found in different sites.

Since 2010, Schein has led the Bighorn Basin Dinosaur Project expeditions to study the dinosaurs and ecosystems of northern Wyoming and southern Montana. Last year, while he and his team were excavating a triceratops, he stumbled across an abandoned site that he’s digging this summer.

Last spring, some folks from the Montana Bureau of Land Management (BLM) asked me and my field crew to go to the site of a dinosaur called Suuwassea. It isn’t a famous dinosaur, but it fills an important spot in the evolutionary history of the long-tailed sauropod. And it’s the only skeleton of its kind that’s been found.

They called us at the Bighorn Basin Project because the site is in our field area, and they’d received reports the bright blue tarp covering the site was sticking out of the ground and could draw attention.

When we first got there, we just wanted to cover the site back up, look around for a bit and go back to the triceratops. But when we arrived and pulled back the tarp out of curiosity, there were still bones in the ground: The BLM folks clearly started working on them and just never returned. It isn’t uncommon to leave a site at the end of summer, expecting to come back next season. But things happen and other priorities take precedence.

These bones were visible from the ground when Schein's team pulled back a blue tarp at the dig site. | Brittany Malinowski

While we were extremely excited about seeing the bones, we didn’t have an excavation permit — or the time — to work on that, so we covered the Suuwassea and spent the rest of the day looking around the area.

We weren’t expecting to find anything, but we ended up spotting about 200 pounds of bones and bone fragments lying on the surface, including entire tail vertebrae from two sauropods and bits of an allosaurus. It was amazing and completely unexpected, especially because we’d read all the literature on Suuwassea, and there was no indication any bones were left in the ground.

Our biggest priority this year is to go back, get the rest of Suuwassea and completely comb this area to make sure we have everything. Returning to this site is probably going to be the biggest excavation we’ve ever done.

[This article originally appeared in print as "Dinosaurs Under the Tarp."]