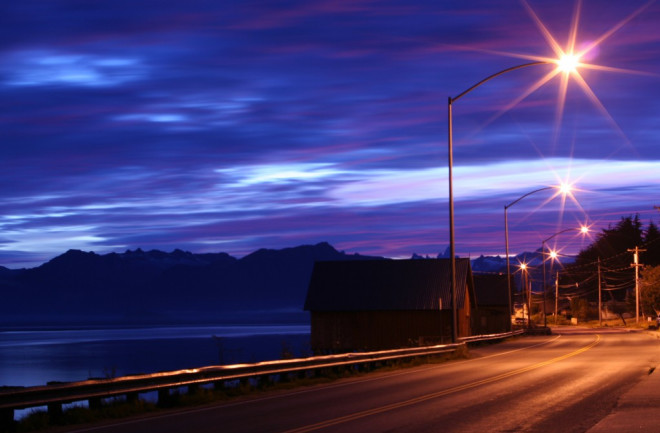 Petersburg, Alaska, at sunset. Credit: Vilmos Varga / Shutterstock One evening last month, library technician Chris Weiss could be seen prowling the streets of Petersburg, Alaska, in her batmobile. She didn’t attract any special attention; the light blue Subaru blended right in. But the sensitive microphone on the roof and the bright yellow box inside the car gave her the power to hear sounds outside of human hearing – bat calls. Weiss is part of a network of citizen scientists tallying the bats of southeastern Alaska through an Alaska Fish and Game Department project. The research is showing what a healthy bat population in the region looks like – important data on its own, but vital information if disease ultimately strikes Alaska’s bats as it has bats in the contiguous U.S.

White-nose syndrome, a fungal disease of bats, caught many biologists by surprise when it was first discovered in the northeastern United States in 2006. Bats were dying, but initially biologists had no idea how big the problem was, since many areas had never done a scientific survey of bats. Scientists could only guess how common certain bat species had been compared to other species before the disease struck, where key bat habitat was, or even roughly how many bats there had been. As the disease surged westward (the fungus has been detected as far west as Ontario and Missouri, with unconfirmed reports in Minnesota and Oklahoma), the Alaska Fish and Game Department stepped up its bat research. The state has various ways of gathering data about bats, including capture studies, radio tagging, and listening to bat calls. Last year, the department added so-called driving acoustic surveys – where a car is affixed with a special microphone, GPS device, and bat detector, and it follows a set path, driving slowly to collect data. The information can show scientists where to find large numbers of bats, which the other methods don’t.

A captured little brown bat from the Juneau area. Credit: Michael Kohan This tactic has been used before, but it has its limitations. For instance, a 2005 study in the United Kingdom required its volunteers to purchase the $250 bat detector to participate. Still, nearly 200 people signed up. (Now the program uses a free smartphone app.) Alaska, however, has worked out a novel solution. In a handful of libraries, beginning last year, citizen scientists borrow the gear just as they would check out a book from the library. Volunteers sign out the devices from their local library and return them in 15 days. Librarians (or, in one case, a local scientist) are trained to help volunteers use the technology. This summer seven cities and towns are participating in the program, ranging from Juneau, Alaska’s capital city, to tiny Gustavus, population 450. The project is popular. In Petersburg, for example, not only was every surveying slot filled, but there was a waiting list for cancellations. Having volunteers conduct the surveys makes them possible, says Michael Kohan, a wildlife biologist with the state’s Wildlife Diversity Program. What we in the lower 48 think of the Alaskan panhandle is actually an archipelago, she explains. “Getting around between the islands is difficult. The citizen science program provides valuable data that we couldn’t get as a two-person team.”

Weiss, the library technician, was one of two people in her town of 4,000 to receive detailed instruction from Kohan on using the device and sending in the data. She strategically waited until August for her turn with the bat detector. (The bat survey is supposed to take place 45 minutes after sunset, and in June in the Land of the Midnight Sun that could be three o’clock in the morning.) When their turn came, Weiss and her husband took a spin around Petersburg to test out the gear before heading out to the U.S. Forest Service road that is the survey’s official route. With the microphone mounted on the Subaru’s roof with a magnet, Weiss needed to leave the car window open a crack for the cable that connected to the bright yellow Anabat box inside the car. The device both recorded sounds that fell into the frequency range of bat signals, and lowered them into the range of human hearing.

An Anabat detector. Credit: johnbullas via Flickr “You get a mass of these staccato clicks,” Weiss says about listening to bat calls on the device. Hearing a little click may not be as dramatic as spotting a moose, she says, but as someone who enjoys observing wildlife, it was satisfying. Weiss thinks all the calls she heard were high pitched enough to be little brown bats, though the official species identification comes later. Kohan and her colleague Karen Blejwas identify the bats by analyzing a visual sonograph of the calls. They compare those sounds to a reference library they made by recording bats they had already captured and identified. This summer’s data hasn’t been analyzed yet, but previously collected information shows there are six species of bats in the area. As was the case in most of North America before white-nose syndrome, the little brown bat is the most common. The most surprising species is the silver-haired bat. This bat species typically migrates short distances to escape harsh winters rather than hibernating, as the other Alaskan bat species do. Scientists are still wondering where an Alaskan bat might find a place both warm enough and close enough to do that.

Data to the Rescue

The citizen science surveys are helping to build the list of Alaskan bat species and how common or rare each species is, but Kohan says the mobile surveys’ greatest value lies in finding locations for more intense study. For example, she says, last year volunteers uncovered a hotspot of bat activity at the confluence of two rivers in Haines, Alaska. This year, the bat research team installed a stationary bat detector at the site. The continuous view of bat activity at the spot is more valuable than a drive-by snapshot, but it wouldn’t be possible without those snapshots provided by the driving survey. Weiss is not sure how many times she will be able to drive the survey route during her 15-day turn with the survey gear. The microphone is very sensitive to moisture, she says, and the area is so rainy that many volunteers only get one dry evening during their stint. Weiss, however, has been so inspired by this new opportunity to observe Alaska’s wildlife that she plans to continue after she’s returned the state’s technology to the library. She’ll use the homemade bat detector created by her husband and a smartphone bat call identification app she’s downloaded. And by her efforts and those of many others like her, the bats of Alaska will finally come out of the shadows.