A Revealing Peek at a Naked Archaeopteryx 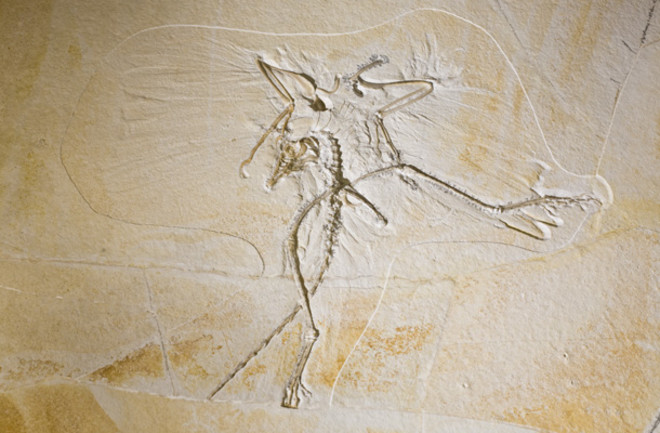 This was no ordinary bird. SLAC National Accelerator Laboratory photographer Brad Plummer knew his time with the precious Achaeopteryx thermopolis fossil would be short, so he made the best of it:

It surprised me to see the Archaeopteryx fossil arrive at the lab with such nonchalance--the two scientists pulled up in a dusty truck with it on the backseat wrapped in foam in a wooden box. I knew the best time to get the shot would be the instant the case came open, before it was mounted for the experiment. I had pre-arranged access to the fossil for a few minutes, although once the lid came off a scrum of onlookers crowded me as I tried to work. This would be the last chance for anyone to photograph the fossil, with nothing between lens and bone, for a long, long time. Getting the right lighting was critical to catching the relief of what is mostly a flat subject. I tried at first with a tripod and cable release, but struggled to get exactly perpendicular to the rock. I took a couple of dozen exposures holding a flash, in one hand at various low angles to rake the light across the fossil and really grab the detail. Back in my studio I was especially thrilled to see the delicate filigree of mineral dendrites tracing through the bones, and the clear impression of wing feathers in the surrounding limestone.

The Archaeopteryx was a primitive bird that lived during the early Tithonian stage of the Jurassic Period, around 150 million years ago. This Archaeopteryx thermopolis specimen was found in the 1970's in Germany--the only country that has produced Archaeopteryx specimens thus far--and came to SLAC in December 2008 to undergo several days of X-ray fluorescence spectroscopy using the synchrotron at the Stanford Synchrotron Radiation Lightsource (SSRL). The purpose of the study was to map the chemical elements trapped in the surrounding rock as the animal decomposed, giving clues to the nature of the soft tissues, such as the composition of the feathers and internal organs. The findings were published in the Proceedings of the National Academy of Sciences in May 2010.