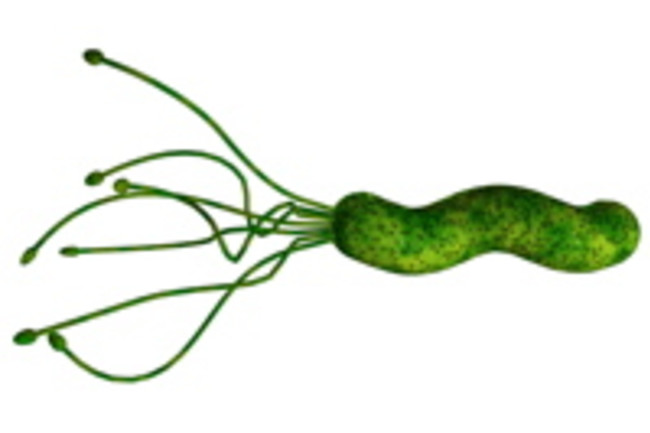 This year's Nobel Prize in medicine or physiology was announced this morning. Barry Marshall and J. Robin Warren won for discovering that ulcers can be caused not by stress or genes but by a bacterium called Helicobacter pylori (shown here). As my fellow Corantean, Derek Lowe, observes, this story follows the classic arc from, "You're completely bonkers" to "You're going to Stockholm." But it also illustrates a point that I made when last year's Nobelists were announced: it demonstrates how intimately woven evolutionary biology is becoming with medicine.

It turns out that Helicobacter infects half of all people on Earth. Once Marshall and Warren showed that this bug caused ulcers (as well as certain cancers and other diseases), scientists began studying the DNA of strains around the world. They wanted to find genetic variations in the bacteria--as well as variations in how sick it made people. While three billion people may carry Helicobacter pylori, only one in ten get sick from it.

The scientists documented a surprising variety of genes in the bacteria. Each ethnic group they looked at carried a distinctive strain. The differences between the bugs arose partly from the familiar sort of inherited mutations, in which a single letter in the DNA might change or in which some chunk of the genome got rearranged. Even within a single host, Helicobacter can undergo significant adaptation, evolving into a "quasi-species" of its own.

But Helicobacter also has a penchant for trading genes--both with other Helicobacter and even with other species. When scientists sampled the bugs in the stomachs of two European subjects, they found 52 genes in one strain not found in the other, while the other strain had 110 unique genes. Giant clusters of genes have been traded as well, which have then been fined tuned through evolution for thriving in the hostile environment of our stomachs. (Here's the free full text of a review from earlier this year in Annals of Clinical Microbiology and Antimicrobials that covers this research,)

As scientists got to know the global variation of Helicobacter better, they began to discover a remarkable pattern. They mapped out an evolutionary tree of the strains of the bacteria and found that it lined up very well with the migrations of humans over the past 50,000 years. One study looked at the Ladakh province of northern India. Muslims and Buddhists have coexisted there for 1000 but remain isolated from one another. It turns out that Muslim Ladakhs only carry a European strain of Helicobacter, while Buddhists carry a mix of European and East Asian bugs. In Peru, Indians who have lived in relative isolation from European colonists carry Helicobacter that is akin to the bugs in East Asia, a major source of migration into the New World. Peruvians from the cities, on the other hand, carried European Helicobacter. It appears that Helicobacter existed in our species before humans began to move beyond Africa, and was then carried around the world as our ancestors traveled the globe. But exactly how long ago this parasite first made its home in us remains to be discovered. (Here's a free pdf of a review in the October 2005 issue of Molecular Ecology.)

Scientists have a long way to go in order to understand the full evolutionary story of Helicobacter. Many ethnic groups have yet to be sampled, and the evolutionary contortions of their bacteria have yet to be documented. This work promises to offer some guidance about what we should do about this remarkable bug. Antibiotics can wipe it out, but that doesn't necessarily mean we should eradicate it from our species. It produces some proteins that kill other microbes, and one study suggested that it reduces the chances of children getting diarrhoea. Other studies have suggested that while Helicobacter causes some kinds of cancer, not having it increases the chances of other kinds. It's possible that a long coevolution has made Helicobacter part parasite, part mutualist--much the same as intestinal worms may have prevented our ancestors from getting allergies. It's even possible that Helicobacter's high-speed evolution allowed it to become more parasitic in some parts of the world and more mutualistic in others. Before we decide on its future, it will serve us well to understand Helicobacter's past.