A Primer to Our Planet of Monkeys

Getting into monkeys' business. 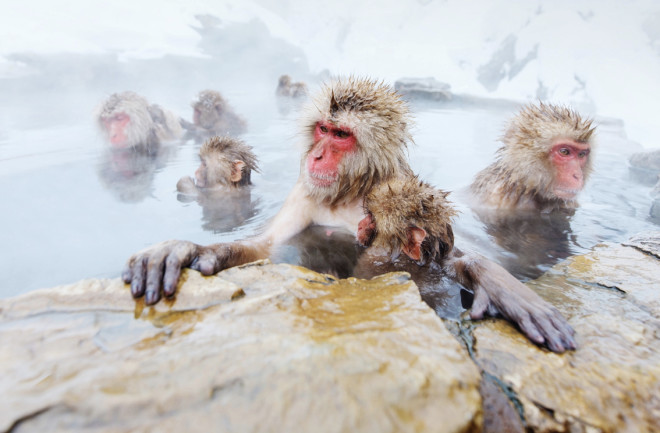 Apes — including gorillas, chimpanzees and humans — are merely an offshoot of the Old World branch. Some 15 million years ago, apes flourished as a group, but they’ve dwindled to a handful of species, a near evolutionary dead-end of animals “barely managing to scrape it together, while the monkeys clearly have things figured out,” says Duke University primate evolution expert Matthew Borths.

Size is one way to distinguish between hulking apes and more diminutive monkeys: Male gorillas can weigh over 400 pounds, but monkeys max out at the 80-pound mandrill.

Monkeys also have tails, which apes lost through evolution. “I’ve often thought that was the very saddest part of human evolution,” says primatologist Dorothy Fragaszy. “It would be wonderful to have a tail. You’re so much more three-dimensional in your movements.” Some New World species evolved prehensile tails, capable of grasping and dangling from trees.

Tails aside, humans and monkeys share many other traits, including big brains, color vision and dexterous hands, suggesting these adaptations were present in our common ancestor.

Despite our shared roots, people are the greatest threat to monkeys. According to a 2017 Science Advances paper, nearly half of monkey species are nearing extinction because of deforestation and other unsustainable human activities. “Now seems to be the worst time ever to be a monkey,” says Borths.

An ancestor common to monkeys and apes (including humans) split off from other primates in the Paleocene, more than 56 million years ago. Monkeys divided into Old and New World lineages around 40 million years ago. Apes are the most recent offshoot of the primate family tree, and one of the less diverse.

Monkey in the Middle (of a Raft)

Researchers think New World monkeys descended from a population of Old World animals that accidentally rafted to South America 36 million to 43 million years ago, trapped on a mass of vegetation that washed off the African coast. More like floating islands, vegetation mats as big as baseball infields have occasionally been spotted by sailors on the high seas.

During this period, the continents were closer, but still separated by more than 600 miles of ocean. Yet, provided enough plant material for chow, rain for drinking water and optimal winds, it’s estimated some unintentional mariner monkeys could have crossed the ancient Atlantic in a couple of weeks. “You imagine them being a little stressed about the situation,” says Borths.

Titi monkeys, comprising over 30 species in South America, are mostly monogamous. Partners stick close together, often nuzzling and entwining tails, and become distressed when separated — indicated by calls, agitated movements and stress hormone levels. While both parents live for years with their offspring, infant care is predominately dad’s job.

At the other extreme, mandrill monkeys of western Africa live in hordes of several hundred individuals. Competition for mates is fierce, and mostly won by the biggest and brightest: Male snouts, genitals and rumps are radiant hues of red, blue and purple. Research has shown that coloration is related to testosterone levels and dominance. And while these top-ranking males sire more than 70 percent of offspring, other males sneak clandestine copulations.

Colorful snouts of mandrills can be a clue to dominance. (Credit: Abeselom Zerit/Shutterstock)

Beyond procreation, some monkeys engage in sexual acts for pleasure and to strengthen social bonds. At least 40 species exhibit homosexual behaviors, such as mounting and genital fondling between same-sex individuals, which can cause orgasm.

Monkeys Mainly Stick to Trees in the Tropics.

But not Japanese macaques. Also known as snow monkeys, the species endures below-zero temperatures by growing thick winter coats and huddling together. One population, in central Japan’s Jigokudani Monkey Park, hangs out in 104-degree hot springs. The bathing, first observed in the 1960s, was associated with reduced levels of stress hormones triggered by cold, according to a 2018 Primates study.

Some Wild Monkeys use Tools.

In Thailand, long-tailed macaques crack open shellfish with stones. On the other side of the globe, in the Brazilian Amazon, palm nuts are smashed hammer-and-anvil style by capuchins — clever monkeys boasting the largest brain-to-body size ratio of any primate besides humans. Regardless of species, the toolmaking behavior is learned: Young monkeys spend years mastering the technique, and not all troops partake.