A Pop a Day Keeps the Predators Away

Two rare snakes from the American southwest— the deadly Sonoran coral snake and the western hook-nosed snake— have developed a novel way to scare off their enemies. When threatened, they emit rumbling air bubbles from the cloaca, the common opening for sex and excretion at a snake's rear end. Want to know what it sounds like? "Essentially, it's snake flatulence," says Bruce Young, an experimental morphologist at Lafayette College in Easton, Pennsylvania.

As the world's leading expert on snake sounds, Young has listened to hissing adders, snoring hognose snakes, and growling king cobras, but he had never heard anything like the cloacal popping. When he brought specimens of the two species to his lab and hooked them up to a microphone, he found that they popped only in response to disruptive stroking or poking. The snakes use two sets of muscles to isolate a compressed pocket of air, which they release to the outside in a startling, explosive burst. "Hook-nosed snakes put so much energy into this pop that in some cases they'll fling themselves up off the ground," says Young. 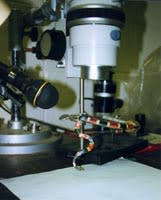