Peter Webster, an atmospheric scientist at the Georgia Institute of Technology, has developed a weather-prediction method that provides a 30-day prediction of the location and intensity of monsoon rains, the heavy tropical downpours that fall annually in South Asia. Such forecasts could allow farmers there to improve planning, avoiding such devastating losses as the $6 billion crop failure that occurred when the rains halted in the Ganges Valley last year. 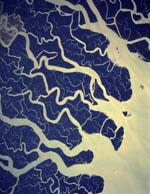 The sinuous waterways where the Ganges River flows into the Bay of Bengal are strongly affected by the ups and downs of monsoon rains.Photograph courtesy of NASA.

Conventional weather forecasting relies on short-term modeling that rapidly loses accuracy when projecting more than a few days ahead. Webster instead combines statistical analysis of past monsoon patterns with current atmospheric readings from weather satellites. Monsoons are difficult to interpret because they wax and wane in chaotic cycles, and the associated rain systems are huge: Each one stretches from Africa to Indonesia and from 20 degrees south of the equator up to 30 degrees north. After years of studying the interaction of many atmospheric variables, including sea surface temperature, wind strength, precipitation patterns, and the rise and fall of El Niño, Webster and statistician Carlos Hoyos formulated equations that predicted rainfall throughout South Asia, Indonesia, and northern Australia. When combined with real-time satellite data, the equations accurately (but retroactively) predicted last summer's drought.

Webster is now working with officials in India and Bangladesh to distribute real, long-term forecasts to farmers. He hopes that such predictions will lead to increased crop yields and an improved standard of living in monsoon regions—which contain half the world's population—while allowing farmers there to optimize insecticide use, save water, and minimize the loss of fertilizers. "We're offering a truly green revolution," he says.