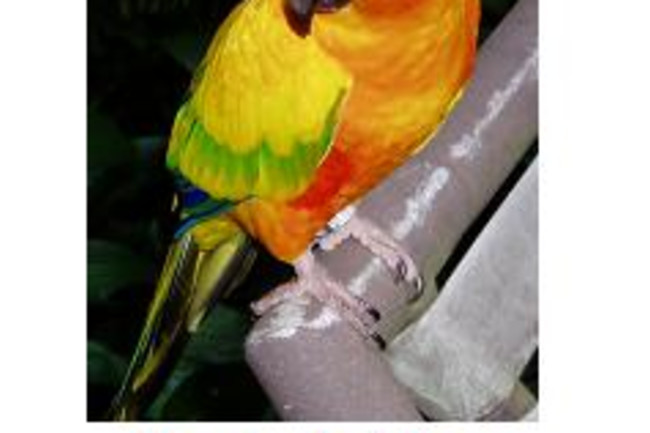 Before Sheril dissected a sea cucumber, briefed a senator, or picked up a mic, she found me - Sparticus Maximus The Great. She's my human. As the superior of species (hey, did you descend from dinosaurs? I thought not!), I keep her in line when necessary. You can imagine with her unusual preoccupation with books -- which ought to be eaten not read! -- this particular homo sapien can be a handful...err beakful. Of course, I try to be patient, recognizing she's less evolved since humans didn't spring into existence until sometime in the Cenozoic Era. Anyway, when we all learned of Friday's devastating news in the world of birds in science, I suggested guest blogging. Sheril and Chris agreed it was most appropriate since they are, you know, as featherless as hatchlings. (It's not their fault -- they were born that way). As Shelley posted, my hero, Alex the African Grey, has died. He was the the companion and colleague of Dr. Irene Pepperberg for over 30 years and shared my love of chewing cardboard boxes. He could label colors, count objects, and was learning the alphabet. Pretty impressive given even I've never been able to master such feats (though I suspect I may be the first bird posting on ScienceBlogs). I've been an avid reader of Retrospectacle's Friday Grey Matters and Alex's appearance on PBS ranks among my favorite moments on film along with Paulie and The Wild Parrots of Telegraph Hill. Most importantly, Irene and Alex brought the amazing cognitive and communicative abilities of birds like us to the attention of folks all around the world. Thank Horus someone among you great apes finally got around to publiclyrecognizingourgenius. Of course, given we've been here since the Mesozoic, it's not fair to compare ourselves to you poor flightless hominids. So don't be discouraged, you just have a lot of evolving to do. Give yourselves some time.

Here at The Intersection, we're extremely saddened to learn of the passing of Alex The Grey and send our deepest condolences to Irene, Griffen, Wart, and the rest of the family. Donations can be made to The Alex Foundation to help assure this important research continues.