A New Way to Make Rain: Shoot the Clouds With Lasers 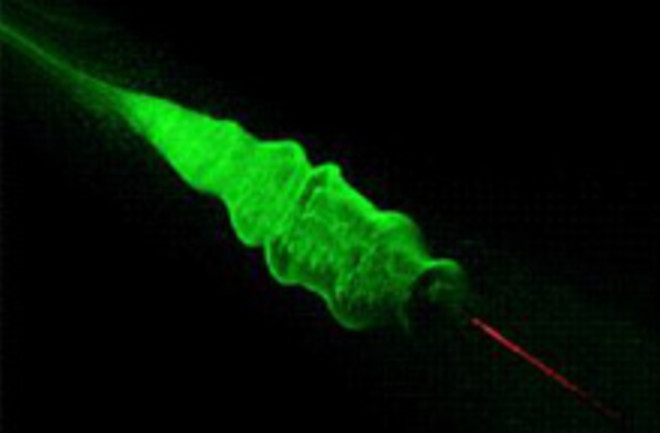 The rainmakers of the 21st century may be armed with powerful lasers. New research suggests that zapping clouds with laser beams could trigger the formation of condensation droplets that would fall to the ground as rain. But while the study, published in Nature Photonics, raises the tantalizing hope of bringing on-demand rain to parched regions, some experts argue the technique is unlikely to ever be practical.

For more than 50 years, efforts to try to artificially induce rain have concentrated on 'cloud seeding' — scattering small particles of silver iodide into the air to act as 'condensation nuclei', or centres around which rain droplets can grow. "The problem is, it's still not clear that cloud seeding works efficiently," says optical physicist Jérôme Kasparian at the University of Geneva, Switzerland. "There are also worries about how safe adding silver iodide particles into the air is for the environment" [Nature News].

So Kasparian and his colleagues tried out a radically different approach. Working first in the lab, they fired a high-powered laser through an chamber containing water-saturated air, and found that the laser pulses increased the total volume of condensed water droplets in the chamber by 50 percent. How does it work? Kasparian explains that the laser beam ionizes nitrogen and oxygen molecules in the air around the beam; those ionized molecules then serve as the condensation nuclei that allow raindrops to grow. The researchers also tested their laser on real clouds in the great outdoors. The lasers seemed to have no effect when humidity was low, but on more humid days the clouds targeted with lasers did show an increase in the density and size of water droplets. Kasparian hopes to increase the effectiveness of the technique by sweeping the laser beam across clouds to cause more widespread droplet formation. However, some experts take issue with the researchers' optimism, and say that the strong effect seen in the lab was only possible because the air in the chamber had a humidity of 230 percent--conditions rarely seen in natural clouds.

This view is supported by Dan Breed of the National Center for Atmospheric Research in Colorado, who says that, on the other hand, laser-enhanced condensation in air with a relative humidity of less than 100% would be very transient and therefore unlikely to generate significant amounts of new cloud droplets, let alone precipitation. “The leap to modifying clouds and even larger jump to influencing precipitation is very speculative and I believe fairly unrealistic,” he claims [PhysicsWorld].